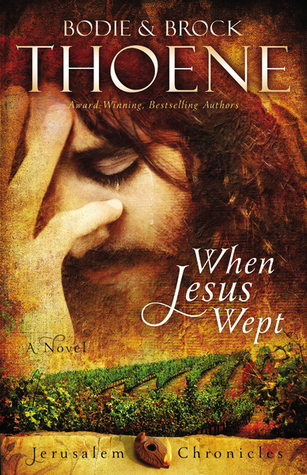 LAZARUS—the man Jesus raised from the dead in one of the most extraordinary encounters with The Living Savior in all of Scripture. But the life of Lazarus holds interest well beyond this miraculous event. Living in Bethany, near Jerusalem, Lazarus witnessed many of the most important events of Jesus’s life and ministry.Lazarus owned a vineyard and devoted his life to caring for its vines and fruit. But he encountered another man—Jesus—whose vineyard was the world, its fruit the eternal souls of men. When Lazarus’s story and the story of Jesus’s crucifixion and resurrection touch in When Jesus Wept, we are offered a unique vision into the power and comfort of Christ’s love.

Brock and Bodie Thoene’s most powerful and climactic writing project to date, When Jesus Wept, captures the power and the passion of the men and women who lived through the most important days in the history of the world.

BODIE AND BROCK THOENE (pronounced Tay-nee) have written over 45 works of historical fiction. These best sellers have sold more than 10 million copies and won eight ECPA Gold Medallion Awards.Bodie began her writing career as a teen journalist for her local newspaper. Eventually her byline appeared in prestigious periodicals such as U.S. News and World Report, The American West, and The Saturday Evening Post. She also worked for John Wayne’s Batjac Productions (she’s best known as author of The Fall Guy) and ABC Circle Films as a writer and researcher. John Wayne described her as “a writer with talent that captures the people and the times!” She has degrees in journalism and communications.

Bodie and Brock have four grown children—Rachel, Jake Thoene, Luke Thoene, and Ellie—and five grandchildren. Their sons, Jake and Luke, are carrying on the Thoene family talent as the next generation of writers, and Luke produces the Thoene audiobooks.Bodie and Brock divide their time between London and Nevada.

I JUST STARTED READING THIS BOOK AND WILL BE POSTING A REVIEW SOON.
Patricia

Posted by Patricia at Wednesday, April 27, 2016 No comments: