Thanks to all of our participants for their wonderful submissions.

Congratulations to Our Winner! 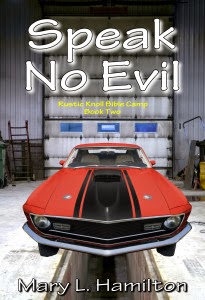 ﻿Having his younger sister at camp was a pain, but Taylor Dixon never expected the pain to go so deep. At 15, Taylor dreams of getting his driver’s license and driving racecars when he’s older. Only his younger sister, Marissa, believes in his dreams, but her adventurous spirit keeps landing him in trouble. Dad won’t let Taylor get his license and predicts he’s heading for the same jail cell as his once-favored older brother.

Taylor returns to Rustic Knoll Bible Camp, expecting softball, swimming and sermons. Then he discovers a classic Mustang in the camp’s machine shed, and the owner’s invitation to help restore it fuels his dream of driving racecars. But when Marissa falls for his snobbish cabin mate, the ensuing war of words and pranks escalates until it threatens to destroy both the car and his dreams for the future.

Or will the message of the old Mustang’s engine set him free from the prison he built himself?

Mary L. Hamilton grew up at a youth camp in southern Wisconsin, much like the setting for her Rustic Knoll Bible Camp series. Her stories feature kids who bring their real life issues to camp
and gain new perspectives on themselves and their problems.

Mary is a graduate of two Long Ridge Writer's Group courses and an ACFW member. She's an award-winning author who started out writing articles and a Christmas play, "Homespun Angel,"
before trying her hand at novels. She and her husband raise three terrific kids and live in Texas with a rescued Golden Retriever.

Mary, your writing is truly inspired! Thank you for answering The Call!

Another great camp tale...waiting for #3

Mary Hamilton, I think your books are truly relevant for teen age kids and good for parents to read as well.

I got hooked after reading the first book in Mary Hamilton's series. Speak No Evil is definitely on my "must-read" list!

An Interview with Mary

How did you come up with the idea for this series?

While raising my three children, I saw so much pain in the lives of their friends who were dealing with all the aspects of their parents’ divorce, as well as conflicts with parents and siblings.

Because of my own background, I believe in the power of Christian camping, so I decided to use some real life issues that kids face and let them deal with them at camp.

Are any of the characters based on real people?

Most of the adult staff in the book are modeled after people I knew as a child. Often, the characters are a combination of people I knew.

The first book in the series is Hear No Evil. This book is Speak No Evil. Will there be one titled See No Evil?

What do you enjoy most about writing?

I love the connection with my readers. It’s very humbling to know that people not only want to read my words but that they get such enjoyment out of the stories. That makes my day!
Posted by Patricia at Saturday, October 04, 2014 2 comments:

Hope at Dawn, Of Love and War, Book 1 by Stacy Henri 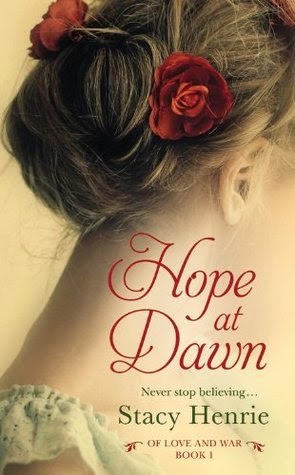 With her brothers away fighting the Great War overseas, Livy Campbell desperately wants to help her family. Her chance comes when she meets a handsome stranger who lands her a job as a teacher in a place far from her parents' farm. But the war casts a long shadow over the German-American town that Livy now calls home-and the darkness will test everything she thought she knew about family and love . . .

More than anything, Friedrick Wagner wants to be part of his adopted country's struggle for peace. But when the bitter animosity between Germans and Americans soon turns citizens against newcomers, friend against friend, he will do whatever it takes to protect Livy from the hysteria that grips their town. As tragedy-and dark secrets from the past-threaten their future, Friedrick and Livy have one chance to stand up for what's right . . . and one chance to fight for their love.

Where to buy: Amazon, Barnes & Noble

Stacy Henrie has always had an avid appetite for history, fiction and chocolate. She earned her B.A. in public relations from Brigham Young University and worked in communications before turning her attentions to raising a family and writing inspirational historical romances.

Wife of an entrepreneur husband and a stay-at-home mom to three, Stacy loves the chance to live out history through her fictional characters, while enjoying the modern conveniences of life in the 21st century. In addition to author, she is a reader, a road trip enthusiast and a novice interior decorator. She and her family currently reside in Utah.

Stacy is represented by Jessica Alvarez of Book Ends, LLC.

Livy Campbell is very aware of the strain the war has brought to her family. If only she could find a teaching position. A handsome man told her about a teaching position in his home town. She applies for the position and is surprised and pleased when her application is accepted. This job will help her family especilly since her brothers are off fighting in the war.

With the coming of war with Germany also came fear and prejudice against the American-Germans. Fredrick Wagner is a born American of German decent. But there are those like his mother, a German Immigrant, that mainly speaks German. The town fears there are German spies living among them. This leaves the German community in fear of their lives and livelihood.

I was married into an American-German family, the Borho's were one of the first to have settled in Williamson County, Leander, Texas. The old home place still stands. My children are very proud of their German heritage.


Livy was even having a hard time trusting Frederick. The fact that Livy feared him broke his heart. Livy knowing her fear was not what God would want of her, she prayed for guidance.

I've read many stories about the war overseas but none depicted the hardship of the German communities in the United States. This shows the burdens of the very young to the very old, no matter the nationality. The children were the ones that touched my heart the deepest.

Disclosure: I received a free copy of this book from Netgally/Forever Publications for an honest review. I was in no way compensated for this review it is my honest opinion.