When World War II breaks out, Miriam Coblentz’s peaceful Amish world is turned upside down...
It’s 1943, and Miriam Coblentz and Henry Mast are nearing their wed­ding day when the unthinkable happens—Henry is drafted. However, since he is a part of the pacifist Amish tradition, Henry is sent to a conscientious objector Civilian Public Service camp. When he leaves for the work camp, his gaping absence turns Miriam’s life upside down. Little does she know it’s only the beginning... When Henry returns home, he brings news that shakes Miriam and their Amish community to the core. Henry believes God has called him to enlist in the army and fight for his country, leaving her to make an impor­tant decision: whether to choose loyalty to the peaceful life she’s always known or her love for Henry. Two worlds collide in this unforgettable debut novel, providing a fasci­nating and rare look into Amish culture during World War II. While Henry is battling enemies across the ocean, Miriam struggles between her devotion to Henry and her love of the Amish way of life. One question is at the bottom of it all: will she follow the rules of her religion or the leading of her heart? 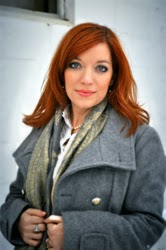 Elizabeth Byler Younts is a member of the American Christian Fiction Writers. She is an Air Force officer’s wife and a homeschooling mom with two young daughters. She makes her home wherever her family is stationed. Elizabeth was Amish as a child and after her parents left the church she still grew up among her Amish family and continues to speak Pennsylvania Dutch.


Miriam Coblentz can't seem to stop thinking about her intended Henry Mast.  Henry has been drafted into the military and sent to a camp for conscientious objectors.  The Amish have always been pacifist.  When he returns home Miriam is shocked to find out he has decide to leave the camp and join the military and the war.  He feels as if God has called him to fight  in World War II.  Miriam can not turn her back on her family and most importantly the her Amish beliefs.  Will she turn her back on Henry the man she loves?

I have read many Amish books but this is the first where I get a better look at the Pacifist side during World War II.  To me it is apparent men are bred to defend their families and country.  Yet I understand the Amish's belief and the pacifist.  Women want to nurture and prevent harm coming to anyone.  But in times of war we have no choice but to defend.  The author has done a wonderful job in depicting the Amish stand of remaining pacifist.

Disclosure: I received a free copy of this book from Howard Publishing/Simon & Schuster for review.  I was in no way compensated for this review.  This review is my honest opinion.