Stuck Together, Trouble in Texas Series, # 3 by Mary Connealy, Q&A with Author 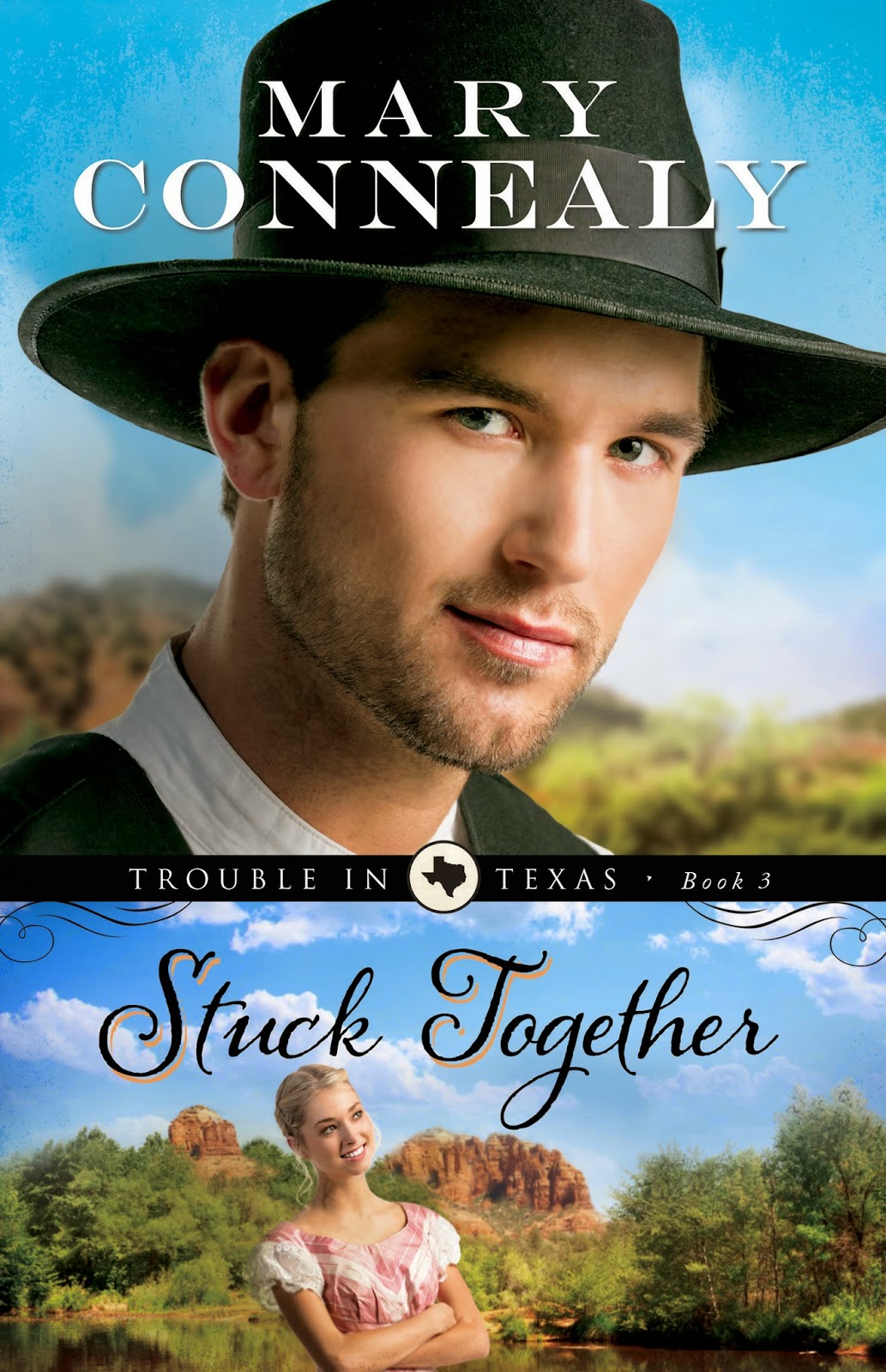 When a lawman who values order gets stuck with a feisty crusader who likes to stir things up, there's going to be trouble in Texas!
Now that she's settled in town, Tina Cahill is determined to get Broken Wheel's saloon closed for good. To that end, she pickets outside the place every afternoon. Unfortunately, so far no one has paid any attention.
Vince Yates earned the nickname "Invincible Vince" because of his reputation for letting absolutely nothing stop him. But Vince is about to face his biggest challenge yet: his past has just caught up with him. His father, mother, and the sister he didn't know he had show up in Broken Wheel without warning. His father is still a schemer. His mother is showing signs of dementia. And his surprise sister quickly falls for one of Vince's best friends. Vince suddenly has a lot of people depending on him, and Tina doesn't approve of how he's handling any of them.
With nearly every other man in town married off, Vince finds himself stuck with strong-willed Tina over and over again. Of course, Tina is the prettiest woman he's ever seen, so if he could just get her to give up her crazy causes, he might go ahead and propose. But he's got one more surprise coming his way: Tina's picketing at the saloon has revealed a dark secret that could put everyone Vince loves in danger.
Read Excerpt here.


Mary Connealy writes fun and lively "romantic comedy with cowboys" for the inspirational market. She is the author of the successful Kincaid Brides, Lassoed in Texas, Montana Marriages, and Sophie's Daughters series, and she has been a finalist for a Rita and Christy Award and a two time winner of the Carol Award. She lives on a ranch in eastern Nebraska with her husband, Ivan, and has four grown daughters.

1. Vince Yates is quite a different character from the others in the Trouble in Texas series—
wealthy and from the big city. How did you come up with his character when you usually
have cowboys?
Vince Yates has money, but he doesn’t really use it for himself, or rather he doesn’t use it to make
a comfortable life for himself. He mostly spends it to survive and to help anyone who needs it.
Vince’s growing-up years were so comfortable, and yet because of a tyrannical father and his
own rebellious streak, nothing about that comfortable, lavish life is a good memory for Vince.
So he uses his money as a tool to make life better, but he doesn’t want the trappings of wealth
because he associates that with unhappiness.

2. What is keeping Vince apart from Tina?
Vince has decided he will never marry. He’s got two parents who have caused him no end of
trouble. His mother, with her society airs and her distant treatment of Vince, felt as though he
was always doing wrong by her. He learned to be terrified of tears, which his mother could turn
on like a faucet. And his father is just plain cruel. He wants Vince under his thumb, while Vince,
who’s a lot like his father in that he’s strong-willed and doesn’t take orders very well, can’t live
like that.
So Vince is haunted by the idea that any child of his will grow up to be like his parents. He
knows they were never happily married and were never very nice to him, and he can only see a
marriage of his own that ends up the same way. He refuses to risk it.

3. What is keeping Tina apart from Vince?
Tina Cahill is a reformer. She’s chosen a mission field that is exactly twenty feet long—walking
a picket line in front of the town’s saloon. She’s grown up with no parents, a critical aunt, and
a brother who abandoned her. She’s as lonely as anyone in the world and almost desperate for
love. The first time Vince looks deep in Tina’s eyes, kisses her, and then apologizes and runs, it
crushes the longing heart she disguises with her mission—and her sense that she’s unloved,
because the righteous are always persecuted. It’s like having blinders ripped away. She sees
herself as being unloved her whole life and decides it has to be because of something in her.
Having Vince reject her after one kiss is devastating, and she won’t risk giving him another
chance.

4. How did you select the Palo Duro Canyon for your novel?
Mainly I needed a canyon. I wanted the book to be set in Texas just because Texas and Westerns
go so perfectly together. I hadn’t done one there in a while, so it was time. But I wanted a canyon
as the setting for Luke’s ranch—Luke Stone, the hero of Swept Away. I started looking for
mountains in Texas, and there aren’t any really, so then I looked for rough land. I found this
beautiful canyon and then discovered one of the biggest ranches in Texas was set right on top
of it. The JA Ranch, owned by Charles Goodnight, who discovered the Goodnight-Loving Trail.
Well, if Goodnight could run a ranch there, then so could I. I knew I’d found my setting.

5. What gave you the idea for the men who are the heroes of this series?
I was doing research for The Kincaid Brides series because the hero of Over the Edge, Seth
Kincaid, had spent time in Andersonville Prison. While reading about the prison I found a
group called the Regulators, a police force inside the prison. The more I read, the more
fascinated I was by that place as I wondered about the men who’d survived it, and, even more so,
the men who’d formed the Regulators and kept peace inside that wretched prison. Out of that
curiosity, the Trouble in Texas heroes were born.

Vince Yates has his hands full with his uncaring father coming to town with Vince's mother and sister in tow. He is also busy corralling the local firecracker Tina Cahill as she creates chaos in the view of the whole town. Now she insists on sticking her pretty little nose into his personal affairs.  He has begun to have these weird thoughts that if she wasn't always busy looking for trouble she might make someone, maybe even himself, a good wife. What could he be thinking, getting stuck with Tina? Could be a real adventure!

When you read one of Mary Connealy's books I gua-ran-tee there will be plenty action, romance and laughter. This book has all that and more. There are some very serious characters like Vince and Tina when put together they manage to turn into a couple like Lucille Ball and Desi Arnez. Lethal yet hilarious.

They both have a powerful dedication to friends and family.  They believe in what is right and just. In all this is the makings of a solid foundation.

Disclosure: I received a free digital copy of this book from Netgalley/Bethany House for an honest review.