Debbie Viguié has been writing for most of her life. She has experimented with poetry and nonfiction, but her true passion lies in writing novels.
She obtained her Bachelor of Arts degree in Creative Writing from UC Davis. While at Davis she met her husband, Scott, at auditions for a play. It was love at first sight.
Debbie and Scott now live on the island of Kauai. When Debbie is not writing and Scott has time off they love to indulge their passion for theme parks.


Debbie has agreed to answer a few questions.

1)Who was your biggest supporter while writing this book? Tell us how this person had an affect your writing.
I am lucky to have a lot of people who love and support me, particularly my husband, Scott, and my parents, Rick and Barbara. They all cheer me on every step of the way. This particular concept, however, had two very ardent supporters: Juanita, a dear, close friend of the family who has always been like a second mother to me, and one of my best friends, Chrissy.
Both of them saw early drafts of one of the novels in the series and every so often would bring it up and ask when was I ever going to finish it? Now, I have hundreds of ideas I’ve played with over the years, dozens of which I’ve discussed with close friends and family. But this story really seemed to resonate, not just with Juanita and Chrissy but also with everyone else I talked to about it. Their refusal to just drop it and let this story fade back into the ether really helped give me the encouragement I needed to turn my attention fully on it. It’s a fantastic story, but I knew it was going to be a hard one to sell. It has so many different genres wrapped up into it and different time periods as well. As much as I loved the story it was a desire to please them that really got me to take it off the back burner and focus my energies on it. I’m thrilled that I did.
2)Tell us about the most difficult chapter you had to write in this book. Tell us why.
The second to last chapter was the hardest to write because for the longest time I thought I was going to end the story in a certain place and when I realized that I needed to change the spot where this book ended that chapter was the one where I had to really shift gears and do a lot of rewriting to make it all snap together. Ultimately I’m thrilled with how it turned out.
3)Can we expect this to be a series and if so when can we expect the next book?
This is the first book in a trilogy. Book two, Kiss of Death, comes out next October. Kiss of Death actually contains more of my original concept for the series than the other two and I’m excited to get it out there. 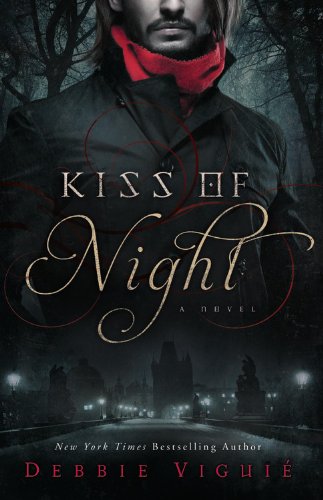 Synopsis:
Centuries ago, Raphael was a blasphemous knight who fought in the Crusades purely for his own mercenary benefit, and to satisfy his taste for killing. Now, condemned for his evil passions and hypocrisy, he wanders the earth a vampire, cursed with first-hand knowledge of the supernatural world he once denied existed. The powerful relic he still possesses from his days as a Crusader has been stolen by a rival vampire who has recruited an army of soulless underlings to aid him in spreading evil. At the time he learns this, Raphael has been hunting this vampire for nearly a century, and it seems the final battle is destined to take place in Prague.
For help in this quest, Raphael must enlist the aid of two humans, David and Susan, who suddenly find themselves immersed in a world they never imagined, entangled with supernatural forces they can’t control. Susan, in particular, finds herself conflicted as she struggles with her inexplicable attraction to Raphael. In the end, both Susan and Raphael will be called upon to exercise courage and faith, and in the process, the question What would happen if a vampire truly accepted God? is answered.


My Thoughts:
I was somewhat skeptical about reading this book. Since it portrays a vampire and is listed a Christian genre.  Then I read the synopsis and read the vampire, Raphel seeks redemption for his sins. Can vampire be saved by the blood of Christ?  I like the story line that evil can be redeemed no matter how vile their sins were.
The author adds a scripture at the beginning of each chapter. You can see how the scripture works into that chapter which was a plus for me.  As you get pulled into the book you begin to route for Raphel to be redeemed.


The cover for the book is outstanding.  I don't normally comment on the cover of a book but this one is exceptional.


The story begins with Susan Lambert arriving in Prague to attend her Grandmother's funeral.  Although her grandmother lived in the states she was born close to Prague. While Susan was in Prague she kept feeling like something dark was following her. Hence, comes Raphel a vampire condemned to wander the earth as a vampire for eternity because of his evil ways.  They partner up in quest for the good of all.  You will enjoy the other character the author has written into this story.


This book pulls you in and you don't want to put it down. That is what happened to me.
I highly recommend this book.
I give it a 5 out of 5.


I want to thank Debbie Viguie for touring on my blog.  I am glad I got the chance to read your book.


Disclosure:
I received a free copy of this book.  This review is my honest opinion and in now way was compensated for that opinion.
Posted by Patricia at Thursday, October 06, 2011