Review for Booksneeze: When God Whispers Your Name by Max Lucado

About author:
Max Lucado has touched millions with his signature storytelling writing style. Awards and accolades follow Max with each book he writes. Max is the first author to win the Gold Medallion Christian Book of the Year three times—1999 for Just Like Jesus, 1997 for In the Grip of Grace and 1995 for When God Whispers Your Name. In 2005, Reader’s Digest dubbed him “America’s Best Preacher.” In addition, he has been an ECPA Gold Medallion finalist with more titles than any other author in the industry.

In addition to his nonfiction books, Lucado has authored several award-winning children's titles including, Just In Case You Ever Wonder, The Crippled Lamb, Alabaster's Song and the award-winning You Are Special. Max is also the author of Hermie: A Common Caterpillar, and the Max Lucado’s Hermie and Friends collection of books and DVD’s are quickly becoming a fixture on bestseller lists. He also served as the general editor for the best-selling Lucado Study Bible and God's Inspirational Promise Book.

In the Fall of 2006, he released Facing Your Giants, followed by Every Day Deserves a Chance in April of the 2007.

For over twenty years, Max has served as the Senior Pastor of the Oak Hills Church in San Antonio, Texas. But he says his greatest accomplishment is finding a one-in-a-million wife in Denalyn and having three unbelievable daughters: Jenna, Andrea, and Sara. 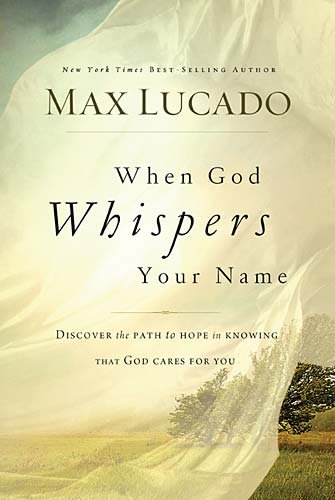 MY THOUGHTS
I love to read Max Lucado inspirational/devotional books. They help me make my way through the day along with my scripture reading. When I read this it is as if I could feel God as I meditate on what I have read. I don't know of any book that Max Lucado has written that did not seem to be inspired by God. I wanted to take a chapter from this book and share it with my blog readers. But instead you need to get a copy of this book for yourself. We sometimes need someone else to help us get inspired and Max Lucado is just the author to do that.

I would recommend my friends to read this book.

Disclosure:
I received a free copy of this book for review by Booksneeze. This review is my honest opinion and was in no way compensated for said opinion.