Litfuse Tour: The Maid of Fairbourne Hall by Julie Klassen 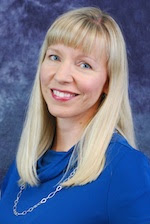 Julie Klassen loves all things Jane--Jane Eyre and Jane Austen. A graduate of the University of Illinois, Julie worked in publishing for sixteen years and now writes full time. She has won the Christy Award: Historical Romance for The Silent Governess (2010) and The Girl in the Gatehouse (2011) which also won the 2010 Midwest Book Award for Genre Fiction. Julie and her husband have two sons and live in a suburb of St. Paul, Minnesota. 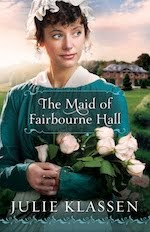 To escape a scheme to marry her off to a dishonorable man, Margaret Macy flees London disguised as a housemaid. If she can remain unwed until her next birthday, she will receive an inheritance, and with it, sweet independence. But she never planned on actually working as a servant. And certainly not in the home of Nathaniel and Lewis Upchurch--both former suitors.

As she fumbles through the first real work of her life, Margaret struggles to keep her identity secret when suspicions arise and prying eyes visit Fairbourne Hall. Can she avoid a trap meant to force her from hiding?

Don't miss the perfect blend of Regency-era romance and mystery in The Maid of Fairbourne Hall! Grab a copy and then be sure to enter Julie's Kindle Fire Giveaway and RSVP for her Author Chat party on Facebook! Swoon.

One fortunate winner will receive:


A brand new Kindle Fire
A Julie Klassen Library (The Maid of Fairbourne Hall, The Girl in the Gatehouse, and The Silent Governess)
Enter today by clicking one of the icons below. But hurry, the giveaway ends 3/14. Winner will be announced at Julie's "Fairbourne Hall" Facebook Party on 3/15 . Julie will be hosting an evening of chat, trivia and a sneak peek at her next book - bring your friends! She'll also be giving away some GREAT prizes: gift certificates, books, and a Downton Abbey Prize Pack!
So grab your copy of The Maid of Fairbourne Hall and join Julie and friends on the evening of March 15th for an evening of fun.

Don't miss a moment of the fun. RSVP TODAY and tell your friends via FACEBOOK or TWITTER and increase your chances of winning. Hope to see you on the 15th!


My Thoughts:
Let's start with a little information about the characters...
These are just the main characters there are many more that make up this story.

Margaret Elinor Macy was determined to come up with a plan to flee her step father's iron rule.  Sterling Benton not only taken over the financial responsibilties of his new family he also chose to lock away all the families jewels.  He also has plans to marry off Margaret to his puppet of a nephew, Marcus Benton, in order go get control of a very large fortune Margaret is soon to inherit.  She overheard Sterling and Marcus scheming to go as far as comprimising her virtue forcing her to marry Marcus.  This she would not allow to happen she had to find a way to escape.  She seeked out an old friend Lewis Upchurch to help her hide away from Sterling but to no avail.  When she was home alone she took money from her step father's room which resulted in her maid, Joan, being accused of the theft and was fired.  Margaret convinced the maid to help her escape and give her safe haven.  She decides to disguise herself by wearing a wig and coloring her eyebrows darker along with wearing a pair of her father's old glasses.  Margaret no longer goes by her real name she is now to be known as Nora Garret and plans to hire out as a servant to support herself until she comes into her inheritance.  She had no clue as how to be a servant.  But she had no other recourse.

Nora is hired as a house maid by Mr. Hudson, a house steward.  When she nears her new place of employment she is shocked to see it is none other that Fairbourne Hall home of the man she spurned, Nathaniel Upchurch and his brother Lewis. Along with their sister, Helen, mistress of the Fairbourne Hall.
She fears she will be recognized and sent back to face whatever her step father has in store for her.  But to her amazement she is able to keep secret from everyone.  Are does she?

It was really diffucult for me to know just how much of the story I should share in this review.  There is so much secrecy among all of the characters, along with manipulation and intrigue.  Of course there is a chance for some romance in the story also.  It is said that the author's writing is comparable to that of Jane Austen's and I whole heartily agree.

There are many interesting quotes in the book.  This is one of many...

Housemaids were meant to be invisible, and all cleaning had to be performed either before the family to up or while they were absent.  As one housemaid later wrote. "It was assumed, I suppose, that the fairies had been at the rooms."  Trevor May, The Victorian Domestic Servant

Disclosure:
I was given a free copy of this book for review by Bethany House Publisher/Litfuse.  I was in no way compensated for this review, it is my own opinion.


If you liked this review please vote here
Posted by Patricia at Wednesday, March 14, 2012