Litfuse Tour: Song of My Heart by Kim Vogel Sawyer 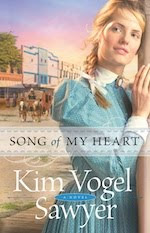 Sadie Wagner has always been devoted to her family. So when her stepfather is injured and can't work, she decides to leave home and accept a position as a clerk at the mercantile in Goldtree, Kansas. Goldtree also offers the opportunity to use her God-given singing talent--though the promised opera house is far different from what she imagined. With her family needing every cent she can provide, Sadie will do anything to keep her job.

McKane comes to Goldtree at the request of the town council. The town has been plagued by bootlegging operations, and Thad believes he can find the culprit.

After he earns enough money doing sheriff work, he wants to use it to pay for his training to become a minister.

Thad is immediately attracted to the beautiful singer who performs in Asa Baxter's unusual opera house, but when he hears her practicing bawdy tunes, he begins to wonder if she's far less innocent than she seems. And when Sadie appears to be part of the very crimes he's come to investigate, is there any hope the love blossoming between them will survive? 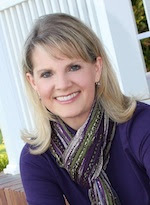 Kim Vogel Sawyer is the author of nineteen novels, including several CBA and ECPA bestsellers. Her books have won the ACFW Book of the Year Award, the Gayle Wilson Award of Excellence, and the Inspirational Readers Choice Award. Kim is active in her church, where she leads women's fellowship and participates in both voice and bell choirs. In her spare time, she enjoys drama, quilting, and calligraphy. Kim and her husband, Don, reside in central Kansas, and have three daughters and six grandchildren.

She invites you to visit her Web site at www.kimvogelsawyer.com for more information.

Win a Nook Tablet from Kim Vogel Sawyer and RSVP for her "Song of My Heart" Facebook Party {3/29}!

Celebrate with Kim by entering to win a Nook Tablet and connecting with her at the Book Chat Party on 3/29!

One "songbird" winner will receive:


So grab your copy of Song of My Heart and join Kim and friends on the evening of March 29th for an evening of fun.

Don't miss a moment of the fun. RSVP TODAY and tell your friends via FACEBOOK or TWITTER and increase your chances of winning. Hope to see you on the 29th!


Sadie Wagner has taken a job away from her hometown and family in order to provide for her parents and siblings.  Her stepfather was badly injured and is unable to work.  An long time family friend recommends Sadie for a job as store clerk in Goldtree, Kansas.  She not only has a job to be a store clerk but also the chance to sing in the town's Opera House. God had given Sadie an amazing talent for singing.


Thad McKane is also a new resident in town. But he does not plan on staying in town very long. He has been hired to be the Sheriff of Goldtree only long enough to flush out a bootlegging operation.  His future plan is to solve this case earning enough money to pay for training  to become a minister.  It did not take long for Thad to notice Sadie.  He is very attracted to her but is afraid she might be involved in the boot legging operation.


I am sure Sadie moving away from home for the first time in her life and feeling betrayed by someone your family and everyone else had thought to be trust worthy must have been traumatic.  When God gives us gifts, like all things in our lives they are to be used to glorify God.  Only by the grace of God can we do this.


Another reviewer made a comment in one of her reviews that she wanted to scream at the characters in the book telling them what they should do.  Well this is how I felt in this book I wanted to scream at Sadie wanting to protect her from making the wrong choices she was faced with so far from home.


Disclosure
I was given a free copy of this book for review by Bethany House.  I was in no way compensated for this review.  It is my own opinion.