All Things New by Lynn Austin 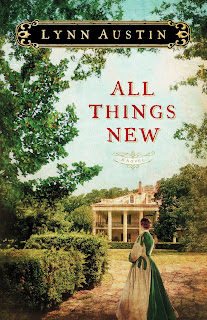 The war is over. The South has lost.

Josephine Weatherly struggles to pick up the pieces of her life when her family returns to their Virginia plantation. But the realities of life after the war cannot be denied: her home and land are but a shell of their previous grandeur; death has claimed her father and brother; and her remaining brother, Daniel, has returned home bitter and broken.

Her life of privilege, a long-ago dream.

Josephine soon realizes that life is now a matter of daily survival--and recognizes that Lizzie, as one of the few remaining servants, is the one she must rely on to teach her all she needs to know. Josephine's mother, too, vows to rebuild White Oak--but a bitter hatred fuels her.

Can hope--and a battered faith in God--survive amid the devastation?

Lynn Austin, a former teacher who now writes and speaks full time, has won eight Christy Awards for her historical fiction. One of those novels, Hidden Places, has also been made into a Hallmark Channel movie. Lynn and her husband have raised three children and make their home near Chicago, Illinois.

The Civil War has ended and now Josephine, her mother and younger sister are ready to go home to White Oak Plantation after a long stay with her Aunt.  She is not even sure what condition the plantation will be in when they arrive.

She was surprised to find a few slaves had stayed even though they had been declared free of slavery.  The house was a shambles but it was still standing. It just needed some cleaning and she was sure her mother would make sure things were put in order.  Josephine was shocked by her mother's attitude that she was going to make everything the same as it was before the war.  As far as Josephine was concerned nothing would every be the same again.

With the one male ex-slave whom now is to be called a servant there was no way to get the fields planted with cotton.  His wife, two young sons and daughter were taking care of the cooking, cleaning and the other chores that Mrs. Weatherly expected to be done daily.  Yet there still was not enough hands or time in a day to get everything done according to Mrs. Weatherly's liking.  Mrs. Weatherly seemed to treat the servants as if they were still slaves. Josephine tried to help with some of the gardening and chores but it just angered her mother. So Josephine took to doing the chores around the time her mother was napping.

Then things really got out of sorts when Josephine's brother, Daniel came home from the war.  It was hoped that he would be able to take over running the plantation.  But he was never trained for that position.  He had not excepted the fact that the war was over.

Why is it that some people are so focused on the past that they can't seem to go forward?   Most wanted to blame God for the war and loss of loved ones.  When they lost the war they also lost their faith in God.

The story brought out how wealthy women in the South were so sheltered they had no skills other than how to catch a husband and keeping the servants in line.  They had no idea how the clean clothes appeared or the silver polished, etc.

The author wrote of their lack of money, food, clothing, shoes especially trust and they were too proud to ask for help from their new government.

In this book you will see the Post Civil War through the lives of ex-Slaves, southern land owner and Union soldiers.

It was a hard book to put down.  I want to say so much more about this book but then you wouldn't have to read it.   I really want you to read this book.

Disclosure
I received a free copy of this book from Baker/Bethany House Publishing for review.  I was in no way compensated for this review.  It is my own opinion.