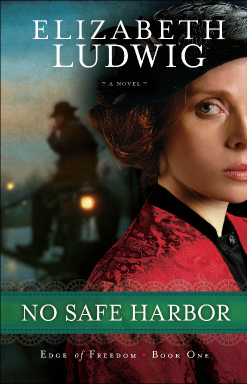 About the Book:
She came to America searching for her brother. Instead all she’s found is a web of danger.

Cara Hamilton had thought her brother to be dead. Now, clutching his letter, she leaves Ireland for America, desperate to find him. Her search leads her to a houseful of curious strangers, and one man who claims to be a friend–Rourke Walsh. Despite her brother’s warning, Cara trusts Rourke, revealing her purpose in coming to New York.
She’s then thrust into a world of subterfuge, veiled threats, and attempted murder, including political revolutionaries from the homeland out for revenge. Her questions guide her ever nearer to locating her brother–but they also bring her closer to destruction as those who want to kill him track her footsteps.
With her faith in tatters, all hope flees. Will her brother finally surface? Can he save Cara from the truth about Rourke… a man she’s grown to love? 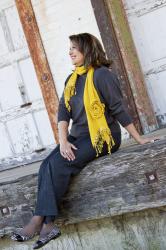 Meet Elizabeth
Elizabeth Ludwig is an award-winning author and an accomplished speaker and teacher. Her historical novel Love Finds You in Calico, California earned four stars from Romantic Times. She is the owner and editor of the popular literary blog The Borrowed Book. Along with her husband and two children, Elizabeth makes her home in Orange, Texas.
Learn more at www.elizabethludwig.com.
Blog Tour Schedule here.


Elizabeth Ludwig is celebrating her new book with a Kindle Fire Giveaway and connecting with readers at a Facebook Author Chat party on 12/6.

One winner will receive:
Enter today by clicking one of the icons below. But hurry, the giveaway ends on December 5th. Winner will be announced at the "No Safe Harbor" Author Chat Facebook Party on 12/6. Connect with Elizabeth, get a sneak peek of the next book in the Edge of Freedom series, try your hand at the trivia contest, and win some great prizes—gift certificates, books and a Book Club Prize Pack (10 copies for your book club or small group)!

So grab your copy of No Safe Harbor and join Elizabeth on the evening of the December 6th for a chance to connect with her and make some new friends. (If you haven't read the book, don't let that stop you from coming!)

Don't miss a moment of the fun, RSVP today. Tell your friends via FACEBOOK or TWITTER and increase your chances of winning. Hope to see you on the 6th!

Ireland, 1897.  Cara Hamilton has lost everyone in her family including her twin brother.  She can't fathom why God would leave her so alone.  Then one day she received a post from America,  it was from her twin brother Eoghan. He was alive and hiding out in New York.  But where in New York. All he said was for her to come, he would be waiting for her.  She was not to mention to anyone why she the journey to America or admit she she knew him.  Their lives were at stake.

As she gets her first look at Lady Liberty as the ship arrives at Ellis Island a kind old gentleman that befriended her on the voyage gave her a recommendation to the owner of a boarding house that helps Irish women to find employment and provides them with room and board.  Cara had brought every penny she possessed to make the trip and to live on until she could be joined with her brother.  As she is taking the fairy from the Ellis Island to the mainland a gentleman close to her age takes the seat next to her.  He strikes up a conversation with her giving his name as Rourke Walsh.  But being a lady she tries to stay to herself.  He offers to safely escort her to the boarding house since he was familiar with the area. She decided to trust him to get her to her destination.

When they arrived at the boarding house she kindly thanked him and he told her he hoped to see her again.  As she entered the boarding house she received a warm welcome thanks to the elderly man's recommendation and gladly paid her first months rent in advance.  She also was to start a new job recommended by her new Land Lady Amelia.

Ellis Island, 1897. Rourke Walsh got word that the sister of the man that murdered his father was on a ship headed for New York to connect with her brother.  His vengeance against Eoghan Hamilton was eating him alive.  He and the rest of his clan wanted the Hamilton family dead.  He finally spots a woman of her description and he is in awe of her beauty.  He must make sure she is Eoghan's sister before taking any action.

Rourke starts spending more time with her but she speaks guarding her words.  The more time he spends with her the more he is attracted to her and wants to protect her from his family.  He can tell she is also attracted to him.  This was not going as he had planned.

This story has all that I like in a book.  It has intrigue, romance, and most importantly reconciliation with God.  The author uses Cara's kindness and vulnerability to protect her from the bitterness Rourke has felt since his father's murder.  I feel as if this is the most critical part of the story.

God will heal his children if only they believe and trust in his will.  There is a Way.  God has a plan!

Disclosure
I received a free copy of this book from Baker Publishing/Bethany House and Litfuse Group for review.  I was in no way compensated for this review.  It is my own opinion.

If you found this review helpful vote yes or no here.
Posted by Patricia at Friday, November 30, 2012