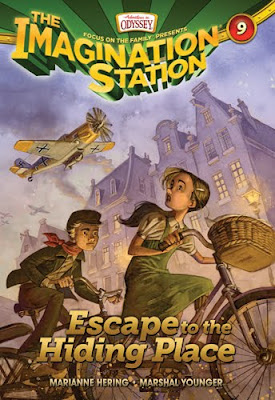 Patrick and Beth arrive in World War II Holland in the farm country. They must smuggle a baby (by bicycle) into the capable hands of Corrie ten Boom at her home in Haarlem. Along the way they hide from Nazi soldiers, meet a Russian surgeon forced into service by the Germans, and encourage two Jewish children who haven't been outside in over three years. The children learn to appreciate the bravery and sacrifice of everyday people who helped the Jews.

Where to buy: Amazon, Barnes&Noble, Christianbook.com

Marianne has written for children since 1987 when she joined the editorial staff of Focus on the Family Clubhouse and Clubhouse Jr. magazines. In the 1990s she wrote six children's mystery books and more than 40 Bible phonic readers (with co-author Margaret Wilber) for Cook Communications. Now a general book editor for Focus on the Family, she has turned her passion for children's fiction into developing a series for beginning readers who love adventure.

Patrick and Beth are disappointed that they will not be getting their Red Cross certificate.  They are too young. So after hearing this Mr. Whit suggests it is time for another adventure with Imagination Station.  When and where in time will they end up this time?

When they are transported they are by a lake and they hear what sounds like an airplane.  To their shock the plane is on fire and is about to crash.  Just before the plane disappeared from site a parachute flew up and out of the airplane.  The they saw some soldiers and heard them rushing about.  Maybe they were looking for the airplane.  At that moment they felt like they should hide in the bushes.  To their great surprise their was a woman hiding in the same spot but when she spoke it was very apparent it was a man.  He told the kids that the soldiers were Nazi soldiers.   So they became extra still and quiet.

The young man's name was Bernard and he offered to take them to his families farm.  From talking to Bernard they find out he is with the Danish Resistance and they are in Holland.They no sooner arrived at the farm when Bernard's father entered the cottage with an injured soldier, he was Canadian and they had to hide him until they could get him safely out of the country.  When a doctor arrived at the cottage he had on a German uniform and he was carrying a small baby.  They were told the doctor had been forced to join the Nazies but he was also a member of the resistance and would help the Canadian soldier.  In turn he needed someone to take the baby to her parent's in the city.  Patrick and Beth were the most logical choice to take the baby to her parents.  The parents were being hidden from the Nazies because they are Jewish and if caught they will be sent to a concentration camp.

Will they be able to get past the Nazi soldiers? What will happen to them if they get stopped?  Who could be brave enough to hide a Jew? Surely if they were found out they too would be sent to a camp.

Again the author has written of a great Historical event about WWII, the Nazies, and the Danish Resistance.  The Historical Christian Heroes which are Christ's Disciples willing to trust God and sacrifice their lives to protect our brothers and sisters in harms way.

The illustrations depict the war and you can see the compassion on the faces of those that reach out to protect and those who reach out for protection.

Disclosure
I received a free copy of this book from Tyndale House for review.  I was in no way compensated for this review. It is my own opinion.