Lovelier Than Daylight ~ The Saddler's Legacy ~ Book 3, by Rosslyn Elliot 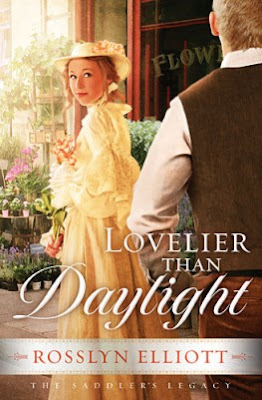 Susanna is a lady of principles who values family above all. Johann seems to represent all she despises . . . but appearances can be deceiving.
In 1875, Susanna Hanby is headed off to college in Westerville, Ohio, when she discovers her sister Rachel and Rachel’s children have disappeared. Susanna suspects that Rachel’s alcoholic husband knows more than he’s saying and she vows to uncover the truth.
Johann Giere is heir to a successful German-American brewery in Columbus, but longs for a career in journalism in New York City. When Johann signs on as the supplier for a new saloon in Westerville, his and Susanna’s paths cross and sparks fly. A fiery temperance crusader, Susanna despises Johann’s profession, but she cannot deny the attraction. 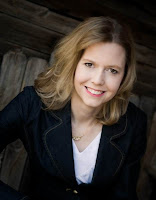 As the child of a career military man, Rosslyn Elliott lived in four states and two foreign countries before she graduated from high school. She attended Yale University, where she earned her BA in English and Theater Studies. After five years working first in corporate New York City, then as a schoolteacher, she entered the Ph.D. program at Emory University and finished her dissertation in 2006.

Her study of American literature spurred her to pursue her lifelong dream of writing fiction. She has won awards for both her fiction and non-fiction writing, including the 2011 Laurel Award and the 2011 Lime Award for Fairer than Morning and the 2006 Lore Metzger Prize for her dissertation. Fairer than Morning was selected as one of Lifeway Fiction's Ten Favorite Reads for 2011.

Rosslyn lives with her husband and daughter in the southern United States, where they enjoy working with horses and pampering their dogs.

Her fiction is represented by Rachelle Gardner of Books and Such Literary Agency.

In book three of The Saddler's Legacy series Susanna Hanby stops in to visit her sister. But her sister Rachel and Rachel's children are are are no where to be found.  Rachel's drunkard husband said that Rachel had be unfaithful to him and that she gave her children to an orphanage.  Susanna did not believe her sister would do such things.  Rachel was a good mother and loved her children even during the harshest of times.

Susanna was on a quest to first find the children and then to find their mother.  She may even have to put off her life long dream of going to college in order to care for the children.  She is living with her grandparents and hopes they will be able to help her in finding and caring for the children.

Johann Giere is the heir to his family's brewery but he would much rather be a newspaper journalist.  One day he meets Susanna and her grandfather on the train and when Susanna found out his family owned a brewery she was ready to take his head off.  She felt it was because of people like him that turned her brother-in-law to drink and therefore causing her sister to be missing and the children being thrown into an orphanage.  Nothing would sway her opinion differently!

The author brings The Saddler's Legacy ahead to the third generation of Handby's.  She creates Susanna as a headstrong woman moving into a new era fighting for the civil  rights of women and children. There is a mystery to solve and a quest to conquer.   Susanna's dragon to kill in this case is alcohol in any fashion.  She blames it for all her families problems.  The author came up with a lot of trickery that goes on in the characters attempt to get custody of the children.  She puts her heroine in perilous situations while searching for the sister.  But of course there must be a hero to come to her rescue or shall we say for Susanna's sensibility, her sidekick.

Disclosure:  I won a copy of this book in a giveaway on Lena Nelson Dooley's website.  I was in no way compensated for this review.  It is my honest opinion.