"The Q Manifesto" --A Christian Thriller You Don't Want to Miss!

Clash of the Titles presents... 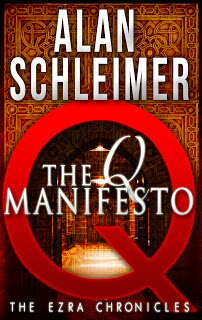 The Q Manifesto by Alan Schleimer
A new Dead Sea Scroll stuns the world. Is it a forgery or the end of Christianity?
Not long ago, experts announced that an ancient papyrus referred to Jesus Christ as having a wife. It caused quite a stir before being quickly discredited. But what if an even more explosive papyrus was found that showed the gospels were faked and that document passed every modern test for legitimacy? That is the premise for The Q Manifesto.
The story centers on Jay Hunt, who quit a lucrative Wall Street career to become a backcountry tour guide. Soon after, an ancient manuscript is uncovered that reveals the Gospels were an orchestrated fiction. Though its revelation stuns the world, Jay ignores it until his father, a retired Dead Sea Scrolls expert, gets in over his head investigating the scroll. Chased by assassins, Jay soon learns that the world’s only chance to survive Armageddon depends on him deciphering a cryptic trail of clues in his quest for the truth. 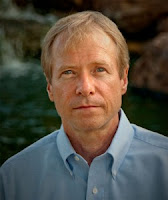 An Unlikely Prospect as an Author
Alan Schleimer wasn’t always a writer. In fact, he says that he was the least likely candidate to become a published author. About ten years ago, he was enjoying a career in the corporate world. The former energy trader and business development professional with a finance MBA claims he struggled writing a two-paragraph business letter. “I kept getting these cool ideas for a book. I thought some day, if I ever retired, I would write it. Well, I noticed that these ideas came more frequently while I was spending my quiet time meditating. Eventually,I became convinced it was a calling from God, and I began writing full-time. The story that started it all was a Christian fiction fantasy. It was a great learning process filled with numerous rookie mistakes. I took writing classes and attended writing conferences until deciding to write the kind of fiction I liked to read—mystery/ suspense/ thrillers.”

Police Academy
Besides studying writing, Alan is a graduate of Sugar Land’s Citizen Police Academy. He describes it as "A great program for anyone, but it was an ideal introduction for me to police procedures. You can read about police work, but the Academy brings to life the daily risks and snap judgments police officers must make to keep us safe.” Besides his Academy participation he has studied martial arts, finance, and what he calls the divine source of all truth—the Bible.
Evidence that the Police Academy and other studies have enriched Alan’s writing is reflected in one reader’s review, which praised it as a “magnificent debut whose stunning depths, pivotal settings and tangible descriptions manifested themselves in imagery akin to an HDTV movie.” His storyline was cited as a “masterfully crafted, full immersion thriller written with intelligence, heart and virtue, brilliantly plotted, and played out at machine gun pace.” Pleased that his book is categorized as Christian fiction, Alan prefers to think of it as a family-friendly wild ride with a message of hope and a challenge to anyone’s faith.
Awards
The Q Manifesto was named the top inspirational/ religious novel of 2012 by the national website Daily Cheap Reads. Previously the story garnered the American Christian Fiction Writers Genesis award in the mystery/suspense/ thriller genre. Schleimer’s debut novel is a suspense thriller and has been compared favorably to Dan Brown’s "Da Vinci Code" for its masterfully- executed twists and turns.
Connect with Alan
The Q Manifesto is available as an eBook at Amazon and by month’s end at most online booksellers in a print edition. You can connect with Alan through his website www.alanschleimer.com and “Like” him on Facebook at www.facebook.com/AlanSchleimer.Author.
--
April W Gardner, award-winning author
www.aprilwgardner.com
Clash of the Titles
http://www.clashoft hetitles. com