My Enemy My Heart by Laurie Alice Eakes 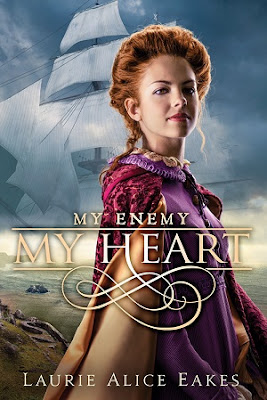 The sea has always been Deirdre MacKenzie’s home, and the crew of her father’s Baltimore clipper is the only family she loves. She’s happier wearing breeches and climbing the rigging of the Maid of Alexandria than donning a dress and learning to curtsey. But, when the War of 1812 erupts, the ship is captured by a British privateer . With her father, the captain, dead, Deirdre sees her crew herded into the hold as prisoners-of-war. Their fate is the notorious Dartmoor prison in England. Her fate as a noncombatant prisoner is uncertain, but the one thing she knows—she must find a way to free her crew.

Kieran Ashford has caused his family one too many scandals. On his way to exile in America, he is waylaid by the declaration of war and a chance to turn privateer and make his own fortune. But he regrets his actions as soon as the rich prize is secured. Kieran figures his best chance at redeeming himself in the eyes of his family is to offer Deidre the protection of his name in marriage. He has no idea that secrets from his parents’ past and Deirdre’s determination to free her crew are on a disastrous collision course.

Love and loyalty clash, as Kieran begins to win Deirdre’s heart despite her plot to betray him and his family. While Kieran works to mend the relationship with his family, he begins to love his bride in spite of what lies between them.

Available in Paperback, Ebook, and Audible CD at Amazon.com and Digital Download at Audible.com.

“Eakes has a charming way of making her novels come to life without being over the top,” writes Romantic times of bestselling, award-winning author Laurie Alice Eakes. Since she lay in bed as a child telling herself stories, she has fulfilled her dream of becoming a published author, with a degree in English and French from Asbury University and a master’s degree in writing fiction from Seton Hill University contributing to her career path. Now she has nearly two dozen books in print.

After enough moves in the past five years to make U-Haul’s stock rise, she now lives in Houston, Texas, where she and her husband are exploring their new neighborhood. Although they haven’t been blessed with children—yet--they have sundry lovable dogs and cats. If the carpet is relatively free of animal fur, then she is either frustrated with the current manuscript, or brainstorming another, the only two times she genuinely enjoys housework.

Deirdre MacKenzie may be a female but she prefers life in the rigging and sails of her father's Baltimore Clipper.  Her love is the sea and at times she can be as unpredictable as the very seas she sails.  Her father can no more tame Deidre than he can the roaring of the sea.  The crew admires her tenacity and would give their very lives to protect her.  Even though she disguises herself as a young boy not all are fooled by the disguise.


Kieran Ashford is not on good terms with his father and decides to purchase a ship when the War of  1812 explodes his world. Instead of going to America he becomes a British privateer.  The first ship he comes upon is none other than the Baltimore clipper, which he takes over without a fight but the Captain succumbed to a natural death before Kieran and his men even boarded the clipper.  He will have to take his prisoners to Dartmoor prison in England.  There does seem to be a problem when he comes upon a sailor that is most definitely not a man but a beautiful young woman and the daughter of the deceased captain.  He can not risk damaging her reputation so he must take steps to make sure she is protected, especially from his so called dark past.

I have not read a swashbuckler in a long time.  This was fun, full of adventure, romance,deception and much more.  I love Deirdre's character so high spirited and undoubtable tom boyish to the highest degree.  She does not want to trust herself or Kieran if it means turning her back on her crew, they are her family first and foremost. You would think Kieran would be a scoundrel but in this story Deidre seems to hold that title very well.

Makes me want to go sailing on a schooner but I will skip the pirates.

Disclosure: I received a free copy of this book from Waterfall Press/NetGalley for an honest review.
I was in no way compensated for this review it is my own opinion.