FROM AUTHOR'S WEBSITE: I'm a native of central Maine, and grew up on a small farm with a wonderful mom and dad, three sisters and a brother. Most of my books take place in small towns, many of them in Maine.


My husband, Jim, and I moved to his birth state, Oregon, for a while after we were married, but decided to move back to Maine and be near my family. We're so glad we did. It allowed our six children to grow up feeling close to their cousins and grandparents, and some of Jim's family have even moved to Maine!


Our children are all home-schooled. The two youngest are still learning at home. Jim recently retired from his vocation as an editor at a daily newspaper, and we’ve moved from Maine to Kentucky.


I've always loved reading, history, and horses. These things come together in several of my historical books. My young adult novel, Sarah's Long Ride, also spotlights horses and the rugged sport of endurance riding, as does the contemporary romance Trail to Justice. I took a vocational course in horseshoeing after earning a bachelor's degree in history. I don't shoe horses anymore, but the experience has come in handy in writing my books.


Another longtime hobby of mine is genealogy, which has led me down many fascinating paths. I'm proud to be a DAR member! Some of Jim's and my quirkier ancestors have inspired fictional characters.


Jim does freelance editing as well. In addition to his 20 years experience at the newspaper, he's edited all my novels before they go out, and he helped edit Primitive Archer Magazine for several years. He has recently edited several novels for Summerside Press.


For many years I worked for the Central Maine Morning Sentinel as a freelancer. This experience was a great help in developing fictional characters and writing realistic scenes. I also published nonfiction articles in several magazines and had several short stories appear in Woman's World, Grit, and Alfred Hitchcock's Mystery Magazine. 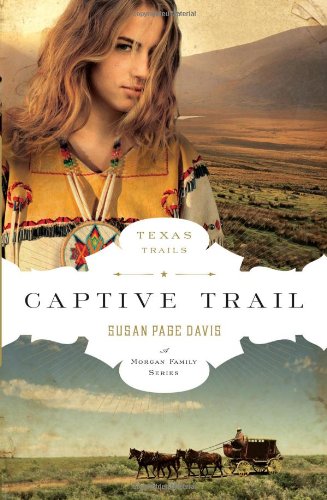 The Captive Trail is second in a six-book series about four generations of the Morgan family living, fighting, and thriving amidst a turbulent Texas history spanning from 1845 to 1896. Although a series, each book can be read singularly.

Taabe Waipu has run away from her Comanche village and is fleeing south in Texas on a horse she stole from a dowry left outside her family's teepee. The horse has an accident and she is left on foot, injured and exhausted. She staggers onto a road near Fort Chadbourne and collapses.

On one of the first runs through Texas, Butterfield Overland Mail Company driver Ned Bright carries two Ursuline nuns returning to their mission station. They come across a woman who is nearly dead from exposure and dehydration and take her to the mission.With some detective work, Ned discovers Taabe Waipu is Billie Morgan. He plans to unite her with her family, but the Comanche have other ideas, and the two end up defending the mission station.

Through Taabe (Billie) and Ned we learn the true meaning of healing and restoration amid seemingly powerless situations.


My Thoughts:
Around the year 1845, Taabe Waipu was taken captive by the Comanche when she was a mere child. She was their slave at first. Not allowed to speak her own language and was made to learn the female role within the Comanche tribe. Once she learned that role she was taken in as a family member of the ones she worked and lived with. But she knew she did not belong and was determined to find her way to the home she could not remember. She fled the Comanche camp and the warrior who wanted her as his bride. Taabe knew he would track her and bring her back.


She was found for dead by a stagecoach driver and taken to a missionary of Nuns where she was taught the ways of her English childhood. Yet she still desired to search for the family she no longer remembered. Ned Bright, the driver who found her was more than willing to help her search for her family.


The author picked right up from where book one left off. She pulled me into the book as if I were a part of story. She made me see how horrendous it must have been for Taabe to be held captive at such a young age. The character was given such fortitude to seek what she knew was her roots. By the author putting Taabe in the care of the Nuns, they not only nurtured her back to health but also to the God she remember from her childhood.


This was a outstanding story and I would highly recommend you read this book.

I Rate This Book

Disclosure: I won a copy this book. I was not compensated in anyway for this review.
Posted by Patricia at Tuesday, December 06, 2011