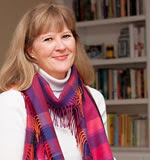 About Suzanne:
Her interest in the Amish began with her grandfather, W.D. Benedict, who was raised Plain. She has many, many Plain relatives living in Franklin County, Pennsylvania, and travels back to Pennsylvania, as well as to Ohio, a couple of times each year for research.


Suzanne has a great admiration for the Plain people and believes they provide wonderful examples to the world. In both her fiction and non-fiction books, she has an underlying theme: You don't have to "go Amish" to incorporate many of their principles--simplicity, living with less, appreciating nature, forgiving others more readily-- into your life.

When Suzanne isn't writing or bragging to her friends about her first new grandbaby (!), she is raising puppies for Guide Dogs for the Blind. To Suzanne's way of thinking, you just can't take life too seriously when a puppy is tearing through your house with someone's underwear in its mouth.

Suzanne can be found on-line at: www.suzannewoodsfisher.com 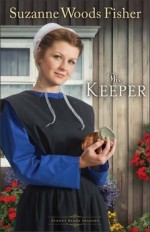 About Book:
Julia Lapp has planned on marrying Paul Fisher since she was a girl. Now twenty-one, she looks forward to their wedding with giddy anticipation. When Paul tells her he wants to postpone the wedding--again--she knows who is to blame. Perpetual bachelor and spreader of cold feet, Roman Troyer, the Bee Man.

Roamin' Roman travels through the Amish communities of Ohio and Pennsylvania with his hives full of bees, renting them out to farmers in need of pollinators. He relishes his nomadic life, which keeps him from thinking about all he has lost. He especially enjoys bringing his bees to Stoney Ridge each year. But with Julia on a mission to punish him for inspiring Paul's cold feet, the Lapp farm is looking decidedly less pleasant.

Can Julia secure the future she's always dreamed of? Or does God have something else in mind?

Enter to win an iPad2 and RSVP for the Facebook Party!

It’s a “Honey of a Giveaway” from Suzanne Woods Fisher!


Enter to win an iPad2 from Suzanne and connect with her on January 17th at The Keeper Facebook Party!


During the giveaway one Grand Prize winner will receive a Prize Pack valued at $600:


But wait there's more! Just click one of the icons below to enter, then on 1/17 join Suzanne for The Keeper Facebook Party! During the party Suzanne will announce the winner of the "Honey" of an iPad Giveaway and host a fun book chat and give away some fun "honey" inspired prizes - It'll be 'sweet"!

RSVP early and tell your friends!


My Review:
A young Amish woman, Julia Lapp has one thing on her mind and that is to marry Paul Fisher.  But thanks to Roamin Roman, the beekeeper, Paul cancelled their wedding not for the first time but the second time. Due to some comments  made by Roman Troy.


Julia's character is headstrong, pretty and very intelligent.  Now Paul is tied to his mother's apron strings and has wandering eyes.  Then there is Roman he knows what he wants in life and it is not a wife
or to be tied down in any one place. He makes sure everyone knows this. It is him and is bees on the road town to town.


When Julia's father needs an extra hand or two around the Windmill Farm they end up with a housekeeper/cook and a farm hand.  Everything and everyone around the farm are in for the Lord's will and a lot of unexpected but welcomed changes.


I highly recommend this book!


Disclosure:
I received a copy of this book for review.  In no way was I compensated for this review.  It is my own honest opinion.


Was this review helpful yes or no permalink