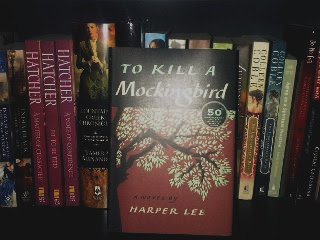 Just added a  book to my collection. TO KILL A MOCKINGBIRD 50TH ANNIVERSARY EDITION
I tend to get excited over my book collection. I have a real passion for books and reading.
HarperCollinsCanada
ABOUT THE BOOK
To Kill a Mockingbird
50th Anniversary Edition
By Harper Lee
Formats: Hardback | Trade paperback | Trade paperback | CD  | Large Print
Publisher:  HarperCollinsCanada
The 50th anniversary edition of one of the best-loved books in American history: Harper Lee’s Pulitzer Prize-winning classic To Kill a Mockingbird. Featuring some of the most memorable characters in literary history—attorney Atticus Finch, his children Scout and Jem, and of course Boo Radley—To Kill a Mockingbird is the indelible story of race, class, and growing up in the Deep South of the 1930s.
To commemorate the Golden Anniversary of the “Best Novel of the 20th Century” (Library Journal poll of American librarians), filmmaker Mary Murphy has interviewed prominent figures—including Oprah, Anna Quindlen, and Tom Brokaw—on how the book has impacted their lives, and compiled the interviews in Scout, Atticus, and Boo: the perfect companion to one of the most important American books of the 20th Century.
Book Description
"Shoot all the bluejays you want, if you can hit 'em, but remember it's a sin to kill a mockingbird."
A lawyer's advice to his children as he defends the real mockingbird of Harper Lee's classic novel—a black man charged with the rape of a white girl. Through the young eyes of Scout and Jem Finch, Harper Lee explores with rich humor and unswerving honesty the irrationality of adult attitudes toward race and class in the Deep South of the 1930s. The conscience of a town steeped in prejudice, violence, and hypocrisy is pricked by the stamina and quiet heroism of one man's struggle for justice—but the weight of history will only tolerate so much.
One of the best-loved classics of all time, To Kill a Mockingbird has earned many dis-tinctions since its original publication in 1960. It has won the Pulitzer Prize, been translated into more than forty languages, sold more than forty million copies worldwide, and been made into an enormously popular movie. It was also named the best novel of the twentieth century by librarians across the country (Library Journal). HarperCollins is proud to celebrate the fiftieth anniversary of the book's publication with this special hardcover edition.
Author Extras
Harper Lee Biography
http://www.harpercollins.ca/author/authorExtra.aspx?authorID=5737&isbn13=9780060935467&displayType=readingGuide
Critical Praise for To Kill a Mockingbird
“All of the tactile brilliance and none of the precocity generally supposed to be standard swamp-warfare issues for Southern writers. . . . Novelist Lee’s prose has an edge that cuts through cant, and she teaches the reader an astonishing number of useful truths about little girls and about Southern life. . . . Scout Finch is fiction’s most appealing child since Carson McCullers’s Frankie got left behind at the wedding.”
— TIME
“That rare literary phenomenon, a Southern novel with no mildew on its magnolia leaves. Funny, happy and written with unspectacular precision, To Kill a Mockingbird is about conscience—how it is instilled in two children, Scout and Jem Finch; how it operates in their father, Atticus, a lawyer appointed to defend a Negro on a rape charge, and how conscience grows in their small Alabama town.”
— VOGUE
“A first novel of such rare excellence that it will no doubt make a great many readers slow down to relish more fully its simple distinction. . . . A novel of strong contemporary national significance.”
— CHICAGO TRIBUNE
Posted by Patricia at Tuesday, January 31, 2012