About Colleen:
Best-selling author Colleen Coble's novels have won or finaled in awards ranging from the Best Books of Indiana, ACFW Book of the Year, RWA’s RITA, the Holt Medallion, the Daphne du Maurier, National Readers' Choice, and the Booksellers Best. She has nearly 2 million books in print and writes romantic mysteries because she loves to see justice prevail. Colleen is CEO of American Christian Fiction Writers and is a member of Romance Writers of America. She lives with her husband Dave in Indiana.

For more about Colleen and her other books visit www.colleencoble.com 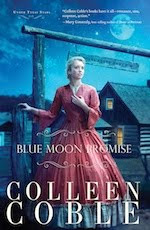 About the book:
Book Number One in the Under Texas Stars series


A love like Lucy and Nate’s only comes along once in a blue moon . . .


Lucy Marsh's worldly resources are running out, but she's fiercely determined to care for her younger brother and sister. When she discovers that their father's recent death was no accident, Lucy is eager to leave town. She accepts a proxy marriage she believes will provide safe refuge. But trouble follows her to Texas where her new husband is surprised to suddenly have a wife and children to care for.

Nate Stanton always hoped he'd marry someday, but running the family ranch meant he had no time for romance. When his father deposits Lucy Marsh—a city girl—on his doorstep, with two siblings in the bargain, he expects ranch life will send her running on the first train out of town. But Lucy is made of tougher stuff than Nate imagined. When danger moves in, Nate finds he'd give anything to protect Lucy and the children he's grown to love. Even if it means giving up his ranch.


Link to buy the book: http://www.thomasnelson.com/consumer/product_detail.asp?sku=1595549153&title=Under_Texas_Stars_#1__:_Blue_Moon_Promise

Blue Moon Promise is a story of hope, romance, and suspense . . . immersing the reader in a rich historical tale set under Texas stars.


To celebrate Colleen is teaming up with her publisher Thomas Nelson for a "Blue Moon Promise" Facebook Chat party where she will giveaway a KINDLE Fire and a Texas-sized gift basket (fabulous Texas treats and fun Lucy-inspired housekeeping products)!


My Thoughts:
Ever since the untimely death of Lucy Marsh's father, danger has been on her door step.  In order to flee this danger she accepts a proxy marriage when an old friend of her father's, Henry Stanton shows up offering her marriage to his son.  She feels as if this is her only chance to care for herself and especially her young brother and sister. But most of all to keep them out of harms way.

When she arrives in Texas things are not quite what she was led to believe. It seems as if her and her new husband, Nate Stanton have been hood winked by her new father-in-law.  Also it seems as if the danger she hoped to leave behind has followed her. Now it is Nate's responsibility to keep his new found family safe.
What would he be willing to give up to protect them?

The character of Lucy is a petite young woman that knows nothing about ranching but is more than determined to prove herself.  She had no idea how tasking a job it would be.  It seemed like every time she turned around her new husband was having to come to her rescue.  Had she made a mistake thinking he would accept her when she herself felt like such a failure.  She clung to her faith and the word of God and   she prayed fervently for God's will in this marriage.

Nate's character at first was not very nice but when the truth of situation came to light he was very much the gentleman and was determined to take care of his new family.  He found Lucy's trials in becoming a ranchers wife amusing and exhausting at times.  He was more patient with her than she was of herself.  He was also very patient and caring toward her brother and sister.  He was proving to be a good example for her brother and father image to both her brother and sister.

This is a wonderful story of faith, love and acceptance in a growing relationship between two people.  There are some shocking evidence that pops up out of the blue and hearts are broken.  But with faith and love hearts will forgive and heal with God's help.

Disclosure:
I received a copy of this book from Litfuse Publicity/Bethany House for review.  I was in no way compensated for this review it is my own opinion.


VOTE ON AMAZON, WAS REVIEW HELPFUL yes or no