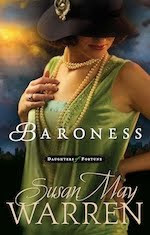 About the book: Baroness – Book Two in the Daughters of Fortune series


Lily and Rose, daughters of an empire coming of age in the roaring twenties, can have anything they want ... except freedom.
Expected to marry well and to take the reins of the empire, they have their lives planned out for them. But, Lily, Esme's daughter longs to return home to Montana, to adventure outside the confines of New York City. And Jinx's daughter Rosie dreams of the bright lights of the newly emerging silver screen. But following their dreams - from avant garde France, to Broadway, to the skies in the world of barnstormers and wing-walkers will take all their courage.
And if they find love, will they choose freedom or happily ever after?
Find out more from Behind the Pages: http://www.susanmaywarren.com/books/baroness 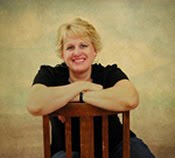 Susan May Warren is the RITA award-winning novelist of over thirty novels. A five-time Christy award finalist, a two-time RITA Finalist, she’s also a multi-winner of the Inspirational Readers Choice award, and the ACFW Carol Award.
A seasoned women’s events speaker, she’s a popular writing teacher at conferences around the nation and the author of the beginning writer’s workbook: From the Inside-Out: discover, create and publish the novel in you!.
She is also the founder of www.MyBookTherapy.com, a story-crafting service that helps authors discover their voice. You can find her online at www.susanmaywarren.com.
Link to buy the book: http://ow.ly/ajLQF

Baroness Roaring 20s Kindle Fire Giveaway from @SusanMayWarren!
Find out what the reviewers are saying here!
Expected to marry well and to take the reins of the family empire, they have their lives
planned out for them. But following their dreams -- from avant garde France, to
Broadway, to the skies in the world of barnstormers and wing-walkers -- will take all
their courage.  And if they find love, will they choose freedom or happily ever
after?
Celebrate with Susan by entering her Roaring 20's Giveaway!
One grand prize winner will receive:
But hurry, the giveaway ends on 5/7/12. The winner will be announced on 5/9/12 on Susan’s blog, Scribbles!

My Thoughts:
Book two in the Daughters of Fortune not only continues in the lives of sisters Esme and Jinx but of their children.   Esme's daughter Lilly and Jinx's daughter Rosie have become each others shadow. Rosie is trying to convert Lilly into a flapper which is a big problem for the pig-tailed cowgirl.   For some reason their mother's thought Lilly could be Rosie's chaperon in an attempt to keep the flapper, wild side of Rosie in check and out of trouble.  They each rebel against each other and their families wishes for their future.  Rosie goes on to be a flapper and Lilly goes for adventure.  Even though they went their separate ways they both managed to put themselves in harms way.  In many instances they are making similar mistakes that their own mother's had made.
Mother's pray for your children to make the right choices.


I enjoyed book one and was anxious to read book two. The Heiress held my attention where the Baroness about half way into the book lost my attention.  I don't think it had anything to do with the author's writing I can't fault her there.  The story line and the timeline was just not my cup of tea.  But it was still a very good read and I am looking  forward to reading book three the Duchess.


I gladly recommend this book.


I rated this book a four out of five.


Disclosure:
I received a free copy of this book by Summerside Press  for the Litfuse Tour.  In no way was I compensated for this review it is my own opinion.
Posted by Patricia at Wednesday, April 18, 2012