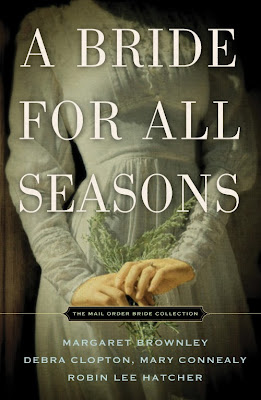 More about A Bride For All Seasons:
It All Started with an Ad in a Mail Order Bride Catalogue . . .
Melvin Hitchcock of the Hitching Post Mail Order Bride Catalog isn't dishonest---not exactly. If he tweaks his clients' applications a bit, it's because he's looking out for their best interests.
This charming bouquet of novellas introduces four Hitching Post prospects in the year 1870, each one eager for second chances . . . and hungry for happiness. Year in, year out, they'll learn that love often comes in unexpected packages.
And Then Came Spring by Margaret Brownley
Mary-Jo has been unlucky all her life. But who would guess she'd travel halfway across the country to meet her match . . . only to find him dead!
An Ever-After Summer by Debra Clopton
Ellie had no idea she's not what Matthew ordered. And what's wrong with being a "Bible thumper" anyway? She's determined to show him she's tougher than she looks---and just the girl he needs.
Autumn's Angel by Robin Lee Hatcher
Luvena would be perfect for Clay if she didn't come with kids. But kids are a deal breaker, especially in a rough-and-trouble mining town. The trouble is, there's no money to send them back. . .
Winter Wedding Bells by Mary Connealy
David's convinced he's not long for the world. He needs someone to mother his boys when he's gone---nothing more. Can plucky Irish Megan convince him to work at living instead of dying?

A Bride for All Seasons – Excerpt 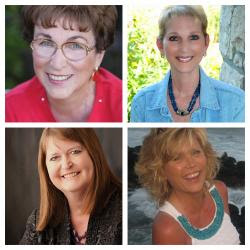 Meet the Authors:
Margaret Brownley is a NEW YORK TIMES best-selling author and has penned more than twenty-five historical and contemporary novels. @margaretbrownley
Robin Lee Hatcher is a Christy and RITA award-winning author. Her books often appear on bestseller lists. @robinleehatcher
Mary Connealy is a Carol Award winner, an a RITA, Christy and Inspirational Reader's Choice finalist. @MaryConnealy
Debra Clopton is an award winning author of sweet, heartfelt, western romance that face life with a smile. With over 2 million books in print, Debra has her first book coming as a movie starring LeAnn Rimes. @debraclopton

Four award winning authors, four books in one about four mail order brides. Now this makes for an interesting read.  The man that operates the mail order bride catalogue appointed himself not just as a go between but as a matchmaker of his own making, editing letters without the senders consent. Some of the women have traveled a long distance to meet their intended only to find there was a lack of communication between the two.  How could so many important details be missing?  It was very apparent they all had been deceived. Most of the women had no money to return to their previous life or other circumstances which prevented them from returning.

Each story is unique in it's own special way. My heart ached for each family. The couples had faith in God that they were together for a purpose.  Many of their personal problems gave them strength to carry on with the arrangement in hope for a better future, even though some were a little more skeptical than others.

Disclosure:  I received a free copy of this book from Litfuse Publicity/Thomas Nelson for review.  I was in no way compensated for this review.  This review is my honest opinion.