A Most Peculiar Circumstance by Jen Turano ~ Bethany House Review 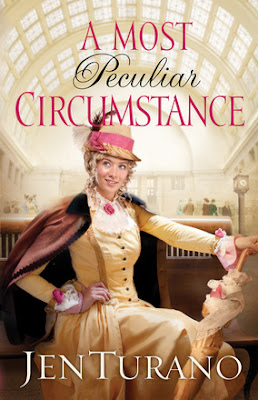 Miss Arabella Beckett, defender of the down-trodden women of America, is returning from her travels in support of the women's suffrage movement when she makes a simple offer of assistance to a young woman in need. But things go sadly awry, and both ladies soon find themselves in dire need of rescue. Arabella, always loath to admit she needs help, is particularly reluctant to receive assistance from the arrogant, narrow-minded knight in shining armor who shows up just in time.

Private investigator extraordinaire Mr. Theodore Wilder is on an assignment that began as a favor to his good friend Hamilton Beckett, but swiftly evolved into a merry chase across the country. He is already in a less than pleasant mood, and when Hamilton's sister turns out to have radical ideas and a fiercely independent streak, he's at his wit's end.

Much to their chagrin, Theodore and Arabella's paths continue to cross when they return home to New York, but the most unusual feelings beginning to grow between them certainly can't be anything serious. When the trouble Arabella accidentally stirred up in her travels follows her home and threatens her very life, the unlikely couple must face the possibility that they might have landed in the most peculiar circumstance of all: love.


Where buy: Amazon, Barnes and Noble 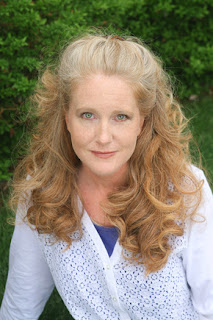 Jen Turano, author of A Change of Fortune, A Most Peculiar Circumstance, and A Talent for Trouble, is a graduate of the University of Akron with a degree in Clothing and Textiles. She is a member of ACFW and lives in a suburb of Denver, Colorado.
Visit her website at www.jenturano.com.

Arabella Beckett has acquired a reputation as an out spoken woman in support of the women's suffrage movement.  Most men see her as a trouble maker because she finds herself in undesirable situation for the sake of the cause. Some incidents as wound her up in peril needing to be rescued from  jail.  This is when a private investigator, Theodore Wilder is sent to bail her and her accomplices out of  the confines of jail.  The problem with this is he is one such man that does not look kindly on her suffrage antics. He feels that she is not only putting herself in danger but also any tag-a-longs in her pursuit for women's rights.

Arabella and Theodore end up traveling a great distance without a proper chaperon which puts them in a most peculiar circumstance   It does not matter that they have nothing in common and get on each others last nerve, they have broken proper etiquette by not having a chaperon.  To make things even worse Arabella's mother is determined to play matchmaker for the couple. As if there were any love between the two or is there?

The author has taken a very important event in history, the women's suffrage movement and wrote a suspenseful romance with lots of humor. She definitely hit right on the horrendous injustice of women's rights and the need for education and proper training for women to acquire a decent job instead of being forced into prostitution in order to provide food and shelter for them and their families.

The author provides stimulating discussion questions in the back of the book which would especially be beneficial in a reading group.   I have thoroughly enjoyed this series and look forward to her next book.

Disclosure:  I received a free copy of this book from Bethany House/Baker Publishing for review.  I was in no way compensated for this review.  This review is my honest opinion.

I you found this review helpful vote yes or no here.