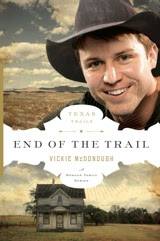 End of the Trail is part of a six-book series about four generations of the Morgan family living, fighting, and thriving amidst a turbulent Texas history spanning from 1845 to 1896.

Brooks Morgan left home 11 years earlier and is just too stubborn to return home. In 1896 he pulls into the town of Shoofly to take refuge from a storm and befriends John Langston in the local cafe. A high stakes poker game ends with Brooks holding the deed to John's ranch with one condition - Brooks must promise to take care of Keri. Brooks agrees, assuming that Keri is a horse.

Overcome by guilt, Brooks return to the cafe to give back the deed but finds John on the floor dead. Brooks heads off to take care of John's ranch and is ambushed. With a noose around his neck, hands tied behind his back he offers a prayer up to God. A stunning shot is delivered from the rifle of a lady on horseback that breaks the noose and frees Brooks. But could this lady - Keri - be an enemy, too?

Where to buy
Amazon
Barnes&Noble
Christianbook.com 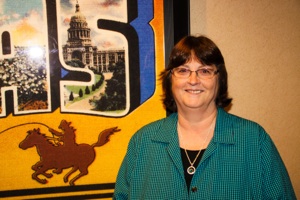 VICKIE MCDONOUGH is the author of over twenty books including the Texas Boardinghouse Brides series. Vickie's books have won the Inspirational Reader's Choice Contest, Texas Gold, and the ACFW Noble Theme contest. Vickie lives in Oklahoma and is a wife of 35 years. She has 4 grown sons and one granddaughter.

Brooks Morgan has been heading West working on one ranch after another. As he rides into the little town of Shoofly it comes a downpour that turns into hail and sends him high tailing it up onto the boardwalk and into a cafe. As he entered a tired looking old guy invites to Brooks to sit at his table and offered to buy him a meal. The man introduces himself as John Langston and offers Brooks a job. Brooks was running out of cash so he excepted the job offer. It turned out that John is terminally ill and needs someone to stay with him until he succumbs to the disease. It was a strange request but he needed to earn some cash if he planned to eat and have traveling money to get him further West.

Brooks didn't realize the job came with a renewal of his faith in God. John's friends had planted seeds of faith that took root in his hardened heart.

One day while playing cards with John and some of his friends John and Brooks were the only ones left in the game. John laid down a deed to some property he owned outside of town and asked to see Brooks cards. Brook laid out his cards and John folded. It looked like Brook was the property owner of the Raven Creek Ranch.

After John passed away and all was taken care of Brooks decided it was about time he saw this so called ranch. He wasn't expecting much but it would be his to do with as he chose. As he headed out some angry rough looking men stopped and questioned him about his proof of ownership of the ranch.

Meanwhile back in Shoofly, Keri is just stepping off the train. Since her Uncle wasn't there to pick her up she went to the livery to rent a horse and headed on out to the ranch. As she rode out toward Raven Creek Ranch she noticed some men were in the process of trying to hang a man. Since she was a crack shot she aimed at the rope just above the man's head. No way could she let those scoundrels take the law into their own hands! As soon as the shot rang out and the rope fell the man's horse took off with him and Keri didn't waste anytime either. She was out of there fast. She was totally unaware that the man's hands were still tied and he had something over his face and  no way of controlling his horse. Not good! Not good at all!

I could go on and on but that would spoil the book for you. I wouldn't want that to happen. So grab the book and find out what happens to Brooks. What will Keri find or not find when she get's to the ranch?  It looks like both of their lives are in for a big change.

This book, just like the others in this series did not disappoint me. It was sad, intriguing and at times down right funny.  I really like the story line of this young man running from responsibility for years only to end up in the same life he left.  But now he is in a different town with his own ranch and letting God lead the way.  I was really sorry for the book to end.  I will miss the Morgan family.

Vickie McDonough wrote two of the books in this series.  Each books in the Texas Trails series can be read as a standalone book or as a series.

I highly recommend this book along with the other books in the Texas Trails series.

Disclosure
I received a copy of this book from RiverNorth/Netgalley for review. I was in no way compensated for this review. This is my own opinion.