The Scent of Rain By Kristin Billerbeck 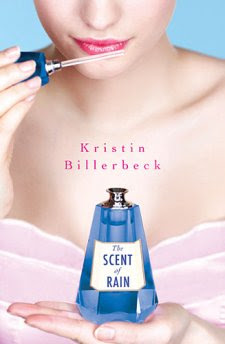 When deprived of her most prized sense, Daphne discovers a life she never expected, right under her nose.
Daphne Sweeten has left Paris – and a career she loves – in order to marry a man she loves even more. But when he stands her up on their wedding day, Daphne’s left reeling. Trained as a professional “nose” or perfume creator, Daphne soon realizes that her sense of smell has somehow disappeared too.
In the days following she moves to Dayton, Ohio, to take on a job creating fragrances for household products. Without her sense of smell, she must rely on her chemistry skills, and hope her handsome new boss, Jesse Lightner, doesn’t notice before she can figure out how to get it back.
Despite her desire to return to Paris, she can’t deny the way Jesse makes her feel. But when Daphne approaches former contacts, she learns her missing ex-fiancé has somehow snagged her old job.
As Daphne and Jesse work on a signature scent for their new line, she feels God at work in her life as never before. And the promise of what is possible is as fresh as the scent of rain.

The only thing she feels right now is humiliated. It is as is she is in a daze unable to move. So many things are racing through her mind.
She needed to stop and  pray for God to give her peace!

As the day comes close to an end she realizes she can't smell anything. It must be from all the stress. Great now she would be stressed that her smell would not come back before she starts her new job. She was hired for her nose surely she would have her smell back once to started the new job.

She decided she was not going to sit around feeling sorry for herself. She was going to start her new job. But she would not move into the house right away she would get a hotel room instead. When she gets into town she would go straight to her new workplace.

What a shock her new boss is handsome. So far so good!  She does not understand how she could feel attracted to this man when she was just dumped. She better concentrate on concealing the fact that she still could not smell anything. She also wanted to find out if her ex-fiance showed up for his new job. This was definitely going to be awkward.

This book was suspenseful and kept me trying to solve the mystery of the absence of the almost groom.  There surely was more to the story than a missing groom .

The author did a great job in the creation of the main characters They showed their Christianity right from the beginning. They had so much faith in God and believed He was leading them to this town and community. God had a plan for their lives and they had to learn to be at peace with His plan. They sought out this peace in prayer and through the comfort of their fellow Christians.

I recommend this book.

Disclosure:
I received a copy of this book from Booksneeze/Thomas Nelson for review. I was not compensated in any way for this review. It is my own opinion.


Vote yes or no if you found this review helpful. here