Healer of Carthage, The Carthage Chronicles, Book 1 by Lynne Gentry 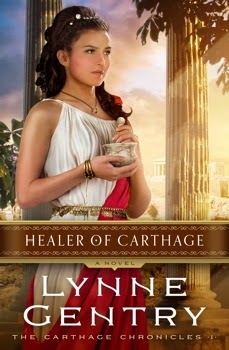 A twenty-first-century doctor. A third-century plague. A love out of time.

First-year resident Dr. Lisbeth Hastings is too busy to take her father’s bizarre summons seriously. But when a tragic mistake puts her career in jeopardy, answering her father’s call seems her only hope of redeeming the devastating failure that her life has become.
While exploring the haunting cave at her father’s archaeological dig, Lisbeth falls through a hidden hole, awakening to find herself the object of a slave auction and the ruins of Roman Carthage inexplicably restored to a thriving metropolis. Is it possible that she’s traveled back in time, and, if so, how can she find her way back home?
Cyprian Thascius believes God called him to rescue the mysterious woman from the slave trader’s cell. What he doesn’t understand is why saving the church of his newfound faith requires him to love a woman whose peculiar ways could get him killed. But who is he to question God?
As their different worlds collide, it sparks an intense attraction that unites Lisbeth and Cyprian in a battle against a deadly epidemic. Even as they confront persecution, uncover buried secrets, and ignite the beginnings of a medical revolution, Roman wrath threatens to separate them forever. Can they find their way to each other through all these obstacles? Or are the eighteen hundred years between them too far of a leap?

Where to purchase: Amazon, Barnes&Noble 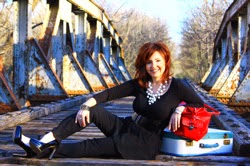 Lynne Gentry was a finalist in Westbow’s 2010 fiction contest. She is a member of the American Christian Fiction Writers (ACFW), and three of her novels have been selected as finalists for the ACFW Genesis contest. Lynne is a pastor’s wife and the mother of two grown children.


Dr. Lisbeth Hastings while on a suspended leave is summoned by her father to an archaeological dig. While exploring ancient cave drawings Lisbeth finds the ground literally disappearing from under her feet. When she regains consciousness she finds herself being sold as a slave to Cyprian Thascius. Angry and fighting for her life Cyprian drags her away to his home.  He tries to calm her but she was beyond calming.  God called upon Cyprian to save Lisbeth from being sold to an evil man. He finds himself draw not only by God to this woman but also by  his heart.

Lisbeth is forced into a situation to use her medical skills when two boys are brought into Cyprian's home during a Christian gathering. The Romans are out to destroy any of the followers of Jesus. How and why did she manage to be in Roman Carthage eighteen hundred years in the past?

This story gave me goosebumps when the ground fell out from under Lisbeth. I wish to tell you so much about the story but then that would spoil the story for you. The author started with a contemporary novel jumping into a historical romance novel. I found interest in the conditions, knowledge and medicines healers eighteen hundred years ago had to work with.

If you are interested in time travel and biblical fiction this is the book for you.

Disclosure:  I received a free copy of this book from Howard Book/SimonSchuster for an honest review.