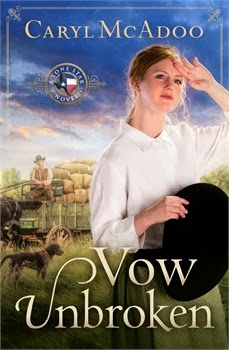 A spunky young widow hires a farmhand with a bad reputation to help her get her cotton to Jefferson to meet the wagon train, and sparks fly—but can she love a man who doesn’t love the Lord?
Susannah Abbot Baylor reluctantly hires Henry Buckmeyer to help her along the Jefferson Trace, the hard stretch of land between her Texas farm and the cotton market, where she is determined to get a fair price for her crop. It’s been a rough year, and she’s in danger of losing the land her husband left to her and the children, but she’ll need help getting both of her wagons to Jefferson safely. She knows Henry’s reputation as a layabout and is prepared for his insolence, but she is not expecting his irresistible good looks or his gentle manner. Soon they are entwined in a romantic relationship that only gets more complicated when Susannah learns that Henry doesn’t know God the way she does. Dangers arise on the road—but none as difficult as the trial her heart is going through.
Will Susannah and Henry’s love overcome their differences? And will she get her crop safely to the cotton market with enough money to save the farm? In this heartening and adventurous tale, a young woman’s fortitude, faith, and heart are put to the ultimate test.

"For You, O God, have heard my vows; You have given me the heritage of those who fear Your name."

Where to Purchase: aMAZON,  BARNES & nOBLE, Caryl McAdoo lives in Red River County, Texas, where she brags the nearest soda pop or gasoline is almost ten miles from home. In the country setting of the Texas piney woods, she enjoys four wheeling over the 916-acre McAdoo Ranch, horseback riding, and caring for donkeys, dairy goats, chickens, and a plethora of dogs and cats. Caryl credits her relationship with the Lord for every good blessing in her life, including ten children (counting “in-loves”) and fourteen grandsugars. Her heart’s desire is to bring Him glory. - See more at: http://authors.simonandschuster.com/Caryl-McAdoo/411169289#sthash.fTTJCuAd.dpuf

The young widow Susannah Baylor is angry and ready to make a long trip to catch up with friends set out on a wagon train to sell their bounty of cotton.  She had been glad to not be making the long trip but after the wagon train was several days out she finds herself cheated and mislead by a buyer that offered her a fair price but when she arrived with her cotton he insisted on paying her a much lower price.  She is discouraged by friends at home to not make the trip alone especially with her daughter and nephew since there are so many danger in such a trek. They recommend she hire Henry Buckmeyer to help her on the trip.  She had heard he was a slacker and a drunk but she knew she could not go alone.

Susannah took their advise finding all the rumors about Henry were unfounded. He was a hard working attractive man and was very patient and kind. Her young daughter Becky falls in love with him and makes it know to him she wants him to be her daddy which must remain their secret until just the right time.  Susannah sees the attachment the children have for Henry but she has made a vow she can not break.  She must focus on getting the cotton sold while overcoming apparent dangers on the long trip.

Susannah is like a mama bear ready to do what she must to protect her cubs.  Her character is strong , independent and determined.  The author writes of a woman wanting to prove to the world she can stand on her own two feet not needing a man to tell her how to do anything.  A character in charge no matter how badly she would love to have a partner to lean on for a change.

An adventurous tale of romance, danger and trust.

Disclosure: I received a free copy of this book from Howard Books/ SimonSchuster for an honest review.