Through the Deep Waters by Kim Vogel Sawyer 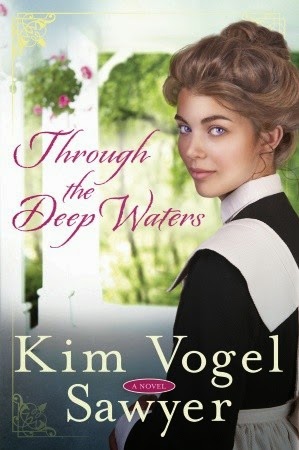 Born to an unloving prostitute in a popular Chicago brothel, timid seventeen-year-old Dinah Hubley was raised amidst the secrets held in every dark, grimy room of her home. Anxious to escape, Dinah pursues her dream of becoming a Harvey Girl, waiting tables along the railroad in an upscale hotel. But when she finds out she isn’t old enough, her only option is to accept a job as a chambermaid at the Clifton Hotel in Florence, Kansas. Eager to put everything behind her, Dinah feels more worthless than ever, based on a single horrible decision she made to survive.

The Clifton offers a life Dinah has never known, but blinded to the love around her, Dinah remains buried in the shame of her past. When a handsome chicken farmer named Amos Ackerman starts to show interest, Dinah withdraws further, convinced no one could want a sullied woman like her. Despite his self-consciousness about his handicapped leg and her strange behavior, Amos resolves to show Dinah Christ’s love. But can she ever accept a gift she so desperately needs?

Kim Vogel Sawyer is a best-selling, award-winning author highly acclaimed for her gentle stories of hope. More than one million copies of her books are currently in print. She lives in central Kansas where she and her retired military husband, Don, enjoy spoiling their ten granddarlings.


Dinah was not only born in a brothel but was raised there until she turned seventeen.  The cook at the brothel told her about advertisements for Harvey Girl waitresses in hopes of getting her out of the brothel before she became like the others.  To her disappointment she would have to be eighteen to be a waitress but to her great surprise they would hire her as a housekeeper at the hotel.  She will finally be able to put the stigma behind her of being shunned by the community as being tainted.

She is determined to stay to herself and work hard at Clifton Hotel in Florence, Kansas so she can move on to becoming a Harvey Girl when she turns eighteen.  She catches the interest and admiration of a Florence local chicken farmer, Amos Ackerman.  She is flattered by the attention but stays in fear of someone finding out about being the daughter of a prostitute.  She avoids making friends with the girls she works with but takes up their invitation to join them in going to church.  She is shown nothing but love and respect from everyone.  She wondered why anyone, much less God, would care about the illegitimate daughter of a prostitute?

The author has written a sad tale of an illegitimate girl searching to find respectability.  More so she yearned for unconditional love.  The character Dinah had little confidence in mankind and for good cause. She was shown little more love than an unwanted rodent.  This story reveals God had other plans for Dinah beyond anything she could ever have imaged.  It was a heart-wrenching tale turned by redemption and reconciliation. Then there is sweet tender love growing in the heart of a most unexpected young man for this lovely lost girl.

Disclosure:  I received a free copy of this book from Blogging for Books/WATERBROOK PRESS for an honest review.