Shadows From The Past by Ashley Dawn Tour/Review

About author:
Author Ashley Dawn was born and raised in rural Arkansas where she developed her love for writing while helping in her parent's office. She graduated with an accounting degree from the University of Central Arkansas but is currently working as a legal assistant. Ashley has been writing professionally for the past seven years and has two published books. Her first book, Shadows From The Past, was originally published by Tate Publishing and is considered more of a traditionally published book while the second, Shadows of Suspicion, was published by self publication using AuthorHouse. Both have since been published in ebook form through Suspense Publishing. She is currently working on multiple projects including the third in her ‘Shadows’ series entitled Shadows of Pain and also a standalone mystery about a serial killer that remains untitled. Ashley also has a review blog to share her love of reading, Ashley’s Bookshelf, where she reads and reviews books of all genres. (http://ashleysbookshelf.blogspot.com) She and her family make their home in Texas. 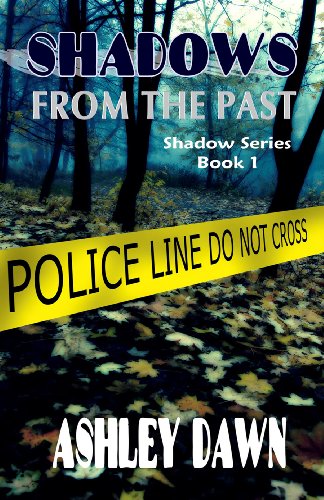 “…It is the price you pay for choosing to be a cop. Your brother’s life…”

Those words haunt her dreams, and her waking moments. LAPD officer, Aurora Kavvan cannot rest until she finds her brothers killer. Digging into the past always brings back unpleasant things: memories, guilt…the hit man. Now she is in a race against time to find the murderer before he finds her.

Someone was trying to kill his dead partner’s sister. FBI agent, Jordan Reiley will stop at nothing to protect the woman he loves. Even if it means going against her wishes; putting himself between her and the man who murdered her brother.

Will God keep them alive long enough for them to find the truth?


My Thoughts:
Aurora Kavvan, an LAPD officer, shuts herself off from everyone that loves and cares about her.  She blames herself for her brothers death.  She has even stopped praying and talking to God.  How could God let this happen to her brother?  It is like she has no right for happiness or forgiveness. Everyone must blame her.  That is what she is thinking and instead of facing them with her feelings and opening her heart to God she puts up a wall.  It is harder to forgive oneself than it is to forgive others.

When she is faced with death threats and a friend/partner ends up seriously injured, she is thrown back into her ex fiancee, FBI agent, Jordan Reiley's life.  Not as his girlfriend but under protective custody.  He protects her not only because it is his job but because he is still in love with her.  But she still has a wall up between her heart and everyone else including him.

The author spins a good tale of suspense.  I can normally figure out who the secretive bad person is but not in this book.  I thought I had it figured out several times.  This was definitely a good mystery to the very end.  It was hard to put the book down.  I am so glad I can jump right into books 2 and 3 in the series.

I highly recommend this book if you enjoy  good mystery/suspense.

Disclosure:
I received a copy of this book from Lightning Book Promotions.  I was in no way compensated for my opinion on this book.  These are my own thoughts and opinion.

The Shadow Series can be found on Amazon Kindle.