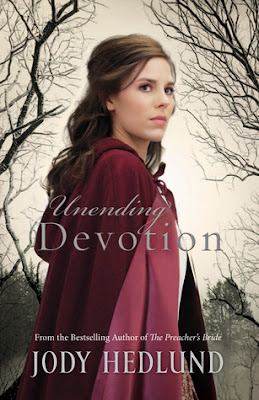 In Her Darkest Hours, Is He the Man She Needs?

Lily Young longs to find her lost sister or will die trying. Heedless of any danger, she searches logging camps and towns, posing as a photographer’s assistant. And then she arrives in Harrison, Michigan–and the sights of Connell McCormick.

Connell is determined to increase the fortune of his lumber-baron father and figures as long as he’s living an upright life, that’s what matters. But when Lily arrives in town she upends his world, forcing him to confront the truth that dangerous men have gained too much power while good men turn a blind eye.

Vexing but persuasive, Lily soon secures Connell’s help, drawing them ever closer to each other. Will standing for what’s right cost them both everything?

Link to buy the book:  http://ow.ly/dihgn

Celebrate with Jody by entering to win a Nikon Camera Prize Pack!

See what folks are saying about Unending Devotion!

One “devoted” winner will receive:
Enter today by clicking one of the icons below. But hurry, the giveaway ends on September 17th. Winner will be announced at the “Unending Deovtion” Author Chat Facebook Party on 9/18. Connect with Jody, get a sneak peek of her next book, try your hand at a trivia contest, and chat with readers just like yourself. There will also be gift certificates, books and a Book Club Prize Pack to be won (10 copies for your book club or small group)!

So grab your copy of Unending Devotion and join Jody on the evening of the September 18th for a chance to connect with Jody and make some new friends. (If you haven’t read the book – don’t let that stop you from coming!)

Don't miss a moment of the RSVP today. Tell your friends via FACEBOOK or TWITTER and increase your chances of winning. Hope to see you on the 18th!

Jody Hedlund is the bestselling author of "The Doctor's Lady" and "The Preacher's Bride". She won the 2011 Inspirational Reader's Choice Award, the 2011 Award of Excellence from the Colorado Romance Writers and was a finalist for Best Debut Novel in the 2011 ACFW Carol Awards. Currently she makes her home in central Michigan, with her husband and five busy children. She loves hearing from readers on Facebook and on her blog.

Lily and her sister Daisy were orphans and was moved from one place to another. Daisy ran away from adoptive family without even telling Lily she was doing so.  Lily was heart broken and was determined to find her sister.  She knew that her sister had no skills to get a job and she was so very young.  Lily feared Daisy had me forced into white slavery to work in one of the brothels in the lumber camps in Michigan.

Lily was fortunate to be living with an older couple that were very kind to her and she was sure she was loved.   The man of the house Oren was a photographer and traveled to the lumber camp to take photos of the men working in the camps to send to their family or to keep themselves.

After Oren's wife died Lily traveled with him as his photographer's assistant.  This was the perfect opportunity to search for her sister.  In the process she found other young girls enslaved in the brothels and she helped some of them escape to return to their families or to a place for a better life.

When Oren and Lily arrived in one of the camps she went into the tavern and was immediately accosted by one of the shanty boys.  Connell McCormick could tell she was truly a lady, and not use to being man handled.  Connell confronted the shanty boy which ended up in a brawl with Lily right in the middle putting up a good fight.  That is until Oren walked in and placed a gun to Connell's head due to the fact that Connell was on the floor with Lily in his lap yet totaly innocent of any fowl play. After the shanty boy was kicked out of the tavern and Lily was safely under Oren's watchful guard she was able to explain what had happened and the gun was taken away from Connell's head.

While Lily stayed at the camp and the tavern not only did she have Oren watching over her Connell was also keeping an eye on her safety.  He knew she had sneaked into his hardened heart and he could not help himself for wanting to protect her.  When he found out about her crusade to save the young girls enslaved in the brothels he tried to discourage her, telling her it was hopeless in trying to save the girls.  But she was determined.  Lily had captured his heart and he would not let her be put in harms way.  His opinion of the young girls plight eventually crumbled and he was caught up in her crusade.  She told him about her life as an orphan along with that of her sister's.  He now realized that Daisy was  initially the reason for Lily's crusade.

This is not just a story about adventure, romance and intrigue, it is about the horrible life women and children were forced into living.  White slavery of women and children has always been a big problem even today.  I admire the author for centering this story on white slavery.  It is something we should not turn on backs on.  We must continue to protect women and children from this horrendous crime.

The real hero in this story was Lily.  Due to her strong faith God, He gave her the strength to push forward with her cause. She was persistent in her crusade against white slavery and recruited other people into to her fight against this injustice to human lives.

I challenge you to do a some research on white slavery not just in the past but in our present time.  Yes, white slavery of women and children is alive and thriving in this day and age. A lot of people hide from the truth but it does not make it go away!

Disclosure
I received a free copy of this book from Litfuse/Bethany House for review.  I was in no way compensated for this review.  It is my own opinion.