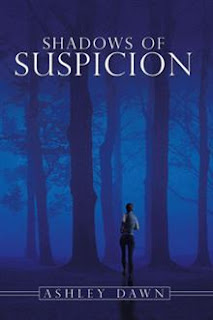 
Revenge is the agenda...

Rick Reiley's words were what drove Luke to search mercilessly for Kerry. He is in a race against time to find her and will have to face more than a criminal mastermind to get close to her. He is prepared to give his life for her, but what about his heart?..".

"Those words from her enigmatic rescuer threw Kerry more than anything else that had happened to her in the last few days...and that was saying a lot Kerry's simple life is turned upside down when she is kidnapped and dragged to the middle of nowhere by a madman. She trusts Luke with her life, but can she trust him with her heart?

As Luke fights to keep Kerry safe, the chemistry ignites and the danger gets closer.

Will God protect them while Luke tries to sort out his heart....and capture Kerry's

Where to buy: Amazon, Barnes&Noble, Smashwords 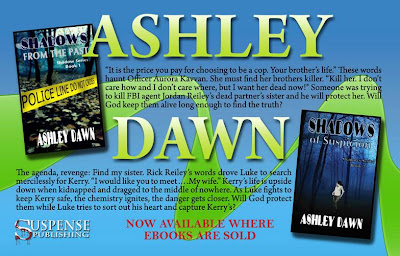 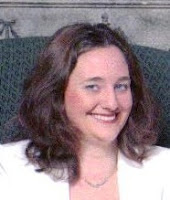 Author Ashley Dawn was born and raised in rural Arkansas where she developed her love for writing while helping in her parent's office. She graduated with an accounting degree from the University of Central Arkansas but is currently working as a legal assistant.

She is currently working on multiple projects including the fourth in her ‘Shadows’ series entitled and also a standalone mystery about a serial killer that remains untitled. Ashley also has a review blog to share her love of reading,

Ashley’s Bookshelf, where she reads and reviews books of all genres. (http://ashleysbookshelf.blogspot.com)

She and her family make their home in Texas.

In book two of the Shadows series Rick Reiley's  sister Kerry is kidnapped by a deranged criminal. He makes demands that can not and will not be met.  Rick contacts an acquaintance that is more than qualified to track down the kidnapper's hiding place and rescue his sister.  Kerry though frightened plans and attempts escape just as Luke locates the cabin when they are holding her hostage.

Will Luke be able to rescue her?  If so he will have to find a safe place for her in case there is another attempt to kidnap her or worse?  Can he manage to protect his heart while protecting her from a mad man?

I had a hard time putting this book down.  I was impressed with the authors creation of characters within Kerry's family.  They had such a bond with each family member and their faith and trust in God was inspiring.
The characters were living proof of God's love for his children.  They were depicted as his disciples as they planted seeds of faith and trust in Luke's heart.  He had hardened his heart toward God.

Disclosure
I received a free digital copy of this book from Lightning Book Promotions for review.  I was in no way compensated for this review.  It is my own opinion.