The Mystery of the Indian Carvings by Gloria Repp 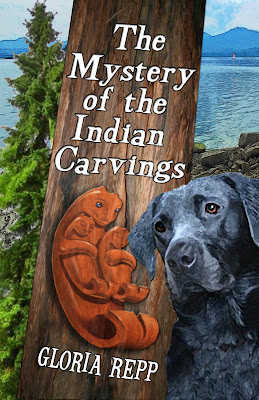 The Mystery of the Indian Carvings

Julie has become a problem at home and is sent to visit her relatives on Bartlett Island near Victoria, Canada. Everyone is on edge, she discovers, because one of Uncle Nate's valuable artifacts has disappeared. Even worse, she's beginning to hate her cousin Karin, her aunt thinks she's a trouble maker, and a persistent reporter is hanging around the family. Problems pile higher and higher and finally, the only person Julie can turn to is the mysterious Native American who lives in the forest. Does she dare to confide in him?

Where to buy: Amazon, Christianbook.com

Gloria Repp grew up in the Hawaiian Islands and the Pacific Northwest; it was there she learned a love for wilderness that pervades her writing. She has taught creative writing, worked as an editor, and written books for children, teens, and adults. In addition to wilderness adventures, she enjoys flying in single-engine airplanes and has a particular fondness for owls and frogs.

Each family member has played a unique part in the writing of her books. Her eldest son teaches on the Big Island of Hawaii, and she has made trips with him to lava tubes and Mauna Kea’s volcano; she values his insights on the natural sciences and on godly scholarship.

With her Seattle son, daughter-in-law, and grandson, she shares an interest in people and music and journeys of discovery, especially on the Olympic Peninsula. She relies on them for a reality check of plot problems.

Her daughter, who lives in Virginia, is a competent resource in matters of sewing, baking, and midwifery. The two cats who have chosen to grace her daughter’s apartment have sufficient character to appear in stories from time to time and often take part in book discussions.

At home, her husband, a pilot and aircraft mechanic, provides valuable input for the aviation elements in her books, entry to the fascinating New Jersey Pine Barrens, and a strong, supporting shoulder. Although she likes traveling to research her novels, she thinks that the best part of every journey is coming home.

Julie hasn't much of a choice as to where she is to spend her summer. Her dad said she could go stay with her Uncle Nate on a Canadian Island or go to a summer camp for girls which was chosen by her step-mom but is really more like a boot camp for bad girls. So it looks like she will be staying at her Uncle's. From what she has been told the island is still inhabited with Indians and Uncle Nate is really into Indian Artifacts. So it might not be so bad after all.  Besides her Uncle has a daughter her age.

Things are not what she had expected.  Uncle Nate stays in his office working.  Her Aunt is always worried or upset about something and their teen daughter turns out to be just plain evil.  But she does like their dog and she can tell he likes her.

Things are very mysterious in this house and on this island and she plans on finding out what is really going on because it is just too weird.

Will she be able to survive the summer on the island or will her dad end up taking her to the summer camp.

I liked that Julie was felt God leading her while reading scripture and she even claimed the scriptures and asked God to lead her in difficult situations.

I highly recommend this book and not just for children  ages 9-12, I recommend it for ages 9 and up.

Disclosure
I received a free copy of this book from the author for review. I was in no way compensated for this review. It is my own opinion.

Posted by Patricia at Saturday, September 08, 2012