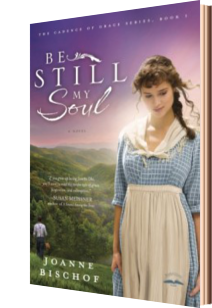 Night’s chill tickled her skin. Lonnie pressed her hands together and glanced up. He was even more handsome up close. Having grown up the shy, awkward daughter of Joel Sawyer, she’d hardly spoken to any boy, let alone the one who had mothers whispering warnings in their daughter’s ears and fathers loading shotguns.

Pretty Lonnie Sawyer is shy and innocent, used to fading into the background within her family, and among the creeks and hollows of the Appalachian hills. Though her family is poor and her father abusive, she clings to a quiet faith.  But when handsome ladies’ man and bluegrass musician Gideon O’Riley steals a kiss, that one action seals her fate.

Her father forces her into a hasty marriage with Gideon—a man she barely knows and does not love. Equally frustrated and confused by his new responsibilities, Gideon yearns for a fresh start, forcing  Lonnie on an arduous journey away from her home in Rocky Knob.

Her distant groom can’t seem to surrender his rage at the injustice of the forced matrimony or give Lonnie any claim in his life.  What will it take for Gideon to give up his past, embrace Lonnie’s God, and discover a hope that can heal their two fractured hearts?

Gideon only ever cared about himself. Now that Lonnie is his wife, will he ever be worthy of her heart?

Married to her first sweetheart, Joanne Bischof lives in the mountains of Southern California where she keeps busy making messes with their home-schooled children. When she’s not weaving Appalachian romance, she’s blogging about faith, writing, and the adventures of country living that bring her stories to life. Be Still My Soul is her first novel.

Lonnie Sawyer can't wait to turn eighteen so she can get out from under her father's iron rule. She only has a few months to go hopefully she can deal with his emotional and physical abuse until then.

Gideon O'Riely turns all the girls heads he can have his pick of any of them.  He is asked to escort Lonnie home after a dance. She is young and pretty why hadn't he noticed her before? He figured it ways because she was so shy. As they neared her house he tried to steal much more than a kiss but she faught him off and ran into her into the house. Unbeknownst to Lonnie and the moonshine drunk Gideon her father saw what he assumed was Lonnie giving herself willingly to Gideon.

Lonnie and Gideon are forced to marry to protect Lonnie's reputation if Lonnie ends up with child even though they both told him nothing happened. Her father would not listen to reason.

The young couple ended up living with Gideon's family until he decides for them to take off on foot for him to seek employment.

Lonnie prays to God to protect her from Gideon's anger at having to slow down because she couldn't keep up with him.

Excerpts:
"What will it take for Gideon to give up his past, embrace Lonnie's God, and discover hope that can heal their two fractured hearts?"

"She willed her heart to harden. To ice over so she wouldn't have to hurt anymore. But when her blurred, she knew it was useless to try."

I keep thinking about the way Lonnie and Gideon were raised.  Lonnie's father held no love for his family and showed his resentment to everyone in his family.  Then there was Gideon who was raised to believe that children were not to love but were no more than another mouth to feed.

How could anyone expect for a child in a home like Lonnie's and Gideon's to ever learn the real love of family? The only way of course is faith and trust in God.

It was hard to walk away from this book.  I wanted to spend more time with Lonnie and Gideon to see how their lives might change.  I am anxious for book two.

Disclosure
I received a free copy of this book from Blogging for Books/Waterbrook Multnomah Publishing for review. I was in no way compensated for this review.  It is my own opinion.