Whispers in the Wind

She's Come This Far.... Must She Turn Back Now?

After fleeing North Dakota and the now defunct Wild West Show, Cassie Lockwood and her companions have finally found the hidden valley in South Dakota where her father had dreamed of putting down roots. But to her dismay, she discovers a ranch already built on her land.

Cassie's arrival surprises Mavis Engstrom and forces her to reveal secrets she's kept hidden for years. Her son Ransom is suspicious of Cassie and questions the validity of her claim to the valley. But younger son Lucas decides from the start that he is in love with her and wants to marry her.

Will Cassie be able to build a home on the Bar E Ranch and fulfill her father's dream of raising horses, or will she be forced to return to the itinerant life of her past?

Award-winning and best selling author Lauraine Snelling began living her dream to be a writer with her first published book for young adult readers, Tragedy on the Toutle, in 1982. She has since continued writing more horse books for young girls, adding historical and contemporary fiction and nonfiction for adults and young readers to her repertoire. All told, she has seventy books published.

Shown in her contemporary romances and women’s fiction, a hallmark of Lauraine’s style is writing about real issues of forgiveness, loss, domestic violence, and cancer within a compelling story.

Her work has been translated into Norwegian, Danish, and German, and she has won the Silver Angel Award for An Untamed Land and a Romance Writers of America Golden Heart for Song of Laughter.

As a sought after speaker, Lauraine encourages others to find their gifts and live their lives with humor and joy. Her readers clamor for more books more often, and Lauraine would like to comply ... if only her paintbrushes and easel didn't call quite so loudly.

Lauraine and her husband, Wayne, have two grown sons, and live in the Tehachapi Mountains with a watchdog Basset named Winston. They love to travel, most especially in their forty-foot motor coach, which they affectionately deem “a work in progress”.

Cassie Lockwood's journey is over. She has found the ranch her father had told her so much about.  He had bought the ranch in partnership with his best friend Ivar Engstrom.  Adam's widow Mavis welcomed her with open arms but her grown sons have reservations about the partnership of their father and Cassie's father.  Mavis and Ivar had never mentioned anything about owning only half of the ranch and their children.

Ransom has his concerns with the fact that this important piece of information was never mentioned until the day Cassie and her friends show up to claim her inheritance which was half of the Bar E Ranch.  Mavis had not only withheld the fact that Adam was a partner in the ranch but that she had also been in love with Adam Lockwood before she married their father. She has not revealed the later to anyone.

Has Cassie come all this way just leave in order to preserve the peace within the Engstrom family? They are the true definition of family and love and she does not want to cause them problems.

Book two was so much better than book one.  I felt more connected with the characters and story. The character Chief has become Cassie's shadow and protector even more so since the death of Adam Lockwood. Micah is the animal handler that came along with them in hopes of finding a place to plant his feet.  Then there is Runs Like A Deer the Indian woman they found injured on their journey and she has made them her family.  All of these people have become a family unit. Oh, let's not forget Wind Dancer the beautiful and talented Pinto and George the buffalo. 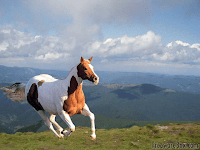 Mavis Engstrom is the glue that holds them all together including the addition of Cassie's little family. Her young daughter Gretchen is a mini Mavis in the making. Mavis's son Lucas gets ahead of himself most of the time though it is usually with the best of intentions.  Her son Ransom is very protective of his family and the ranch. He is a hard nut to crack. But once he cracks it is all good.  Her son Jess is off at college and Mavis is not sure how he will react to news that half the ranch belongs to someone else.

The author told a heartwarming tale of coming home and uniting a group of people that God had meant to be together for the better of all of them.  It is all there love, family, unity, determination and trust in God and their fellow man.

I wanted the story of these beautiful people to continue. Looking forward to reading more.

Disclosure
I received a free copy of this book from Bethany House for review.  I was in no way compensated for this review.  It is my own opinion.