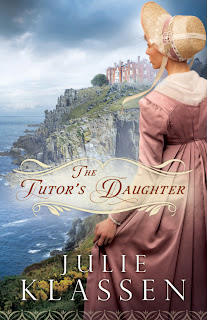 Emma Smallwood, determined to help her widowed father when his boarding school fails, accompanies him to the cliff-top manor of a baronet and his four sons. But soon after they arrive and begin teaching the two younger boys, mysterious things begin to happen. Who does Emma hear playing the pianoforte at night, only to find the music room empty? And who begins sneaking into her bedchamber, leaving behind strange mementoes?
The baronet’s older sons, Phillip and Henry Weston, wrestle with problems–and secrets–of their own. They both remember the studious Miss Smallwood from their days at her father’s academy. But now one of them finds himself unexpectedly drawn to her…
When suspicious acts escalate, can Emma figure out which brother to blame and which to trust with her heart? 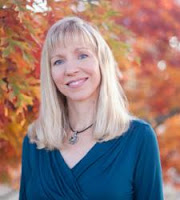 About Julie
Julie Klassen loves all things Jane–Jane Eyre and Jane Austen. A graduate of the University of Illinois, Julie worked in publishing for sixteen years and now writes full time. She has won the Christy Award: Historical Romance for The Silent Governess (2010) and The Girl in the Gatehouse (2011) which also won the 2010 Midwest Book Award for Genre Fiction. Julie and her husband have two sons and live in a suburb of St. Paul, Minnesota.
Find out more about Julie at http://www.julieklassen.com/.

Julie is celebrating by giving away one of the new Paperwhite Kindles, Downton Abbey (season 3) and hosting a fun Author Chat Party on Facebook. (January 31st)

One fortunate winner will receive:
Enter today by clicking one of the icons below. But hurry, the giveaway ends on January 30th. Winner will be announced at "The Tutor's Daughter Author Chat Party on January 31st. Connect with Julie, get a sneak peek of her next book, try your hand at the trivia contest, and chat with readers just like you. There will also be great giveaways - gift certificates, books and season 3 of Downton Abbey!

So grab your copy of The Tutor's Daughter and join Julie on the evening of the January 31st for a chance to connect with Julie and make some new friends. (If you haven't read the book - don't let that stop you from coming!)

Don't miss a moment of the fun, RSVP today. Tell your friends via FACEBOOK or TWITTER and increase your chances of winning. Hope to see you on the 31st!

Emma Smallwood has had her share of adventure living with her parents at their boarding school for boys.  There is one boy in particular, Henry Weston,  that seemed to enjoy playing pranks on her.  Then there was his brother Phillip Weston and he had captured her heart when she was a young girl.  She still held a fondness for Phillip.

Years later after the death of her mother her grieving father is offered to tutor Phillip's two young brothers at the Weston's cliff top manor.  Emma is excited at the opportunity even though she is a little hesitant due to the prankster Henry Weston.  Her father was more open to this venture than she could have imagined maybe this move would help her father heal.

The manor and the family that dwelt therein was not what Julia had expected.  It seemed like the residents of the manor were in total turmoil and did not seem to be expecting them when they arrived.  The very first night strange sounds of emanated from the depths of the manor.  This family was keeping some kind of secret and Emma was pretty sure it was not a ghost.

Phillip was glad to see her but she was not so sure about Henry.  Maybe it had not been such a good idea to come to the Weston's home after all.

The author wrote a story that caused me to have goosebumps more oft than not while reading this book.  It has intrigue, deceit and vindictiveness. Some of the characters were just plain mean and conniving. This book had it all, even romance.

The history brought up in this book about ship wrecks and the scavengers that would steal the treasures thereof was very interesting.  Then there is the description of the cliff overlooking the sea and a chapel tower sounds like a place I would love to have visited and to feel the spray of sea on my face.

Disclosure:  I received a free copy of this book from Bethany House and Litfuse Group for review.  I was in no way compensated for this review.  It is my own opinion.