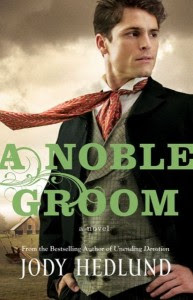 About A Noble Groom:

Annalisa Werner's hope for a fairy tale love is over. Her husband failed her in every way and now his death has left her with few options to save the family farm. She needs a plentiful harvest. That, and a husband to help bring it in. Someone strong, dependable. That'll be enough. A marriage for love...that's something she's given up on.

So her father sends a letter to his brother in the Old Country, asking him to find Annalisa a groom.

Then a man appears: Carl Richards, from their home country of Germany and a former schoolteacher---or so he says. He's looking for work and will serve on the farm until her husband arrives.

With time running out, she accepts his help, but there's more to this man than he's admitting. He's also gentle, kind, charming---unlike any man she's ever known. But even as Carl is shining light into the darkness of her heart, she knows her true groom may arrive any day. 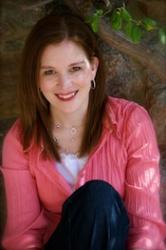 Jody Hedlund is the bestselling author of "The Doctor's Lady" and "The Preacher's Bride". She won the 2011 Inspirational Reader's Choice Award, the 2011 Award of Excellence from the Colorado Romance Writers and was a finalist for Best Debut Novel in the 2011 ACFW Carol Awards. Currently she makes her home in central Michigan, with her husband and five busy children. She loves hearing from readers on Facebook and on her blog.

Find out more about Jody athttp://jodyhedlund.com/.

Jody Hedlund is celebrating the release of A Noble Groom by giving away a Kindle Fire and hosting a Facebook Author Chat Party {5/8}!

One "noble" winner will receive:
Enter today by clicking one of the icons below. But hurry, the giveaway ends on May 7th. Winner will be announced at the "A Noble Groom" Author Chat Party on May 8th. Connect with Jody, get a sneak peek of her next book, try your hand at the trivia contest, and chat with readers just like you. There will also be many fun giveaways -- gift certificates, books, and more!

So grab your copy of A Noble Groom and join Jody on the evening of May 8th for a chance to connect and make some new friends. (If you haven't read the book, don't let that stop you from coming!)

Don't miss a moment of the fun, RSVP today. Tell your friends via FACEBOOK or TWITTER and increase your chances of winning. Hope to see you on the 8th!

Annalisa Werner's marriage was unlike the fairy tales she had read as a child.  She feels nothing more than a slave to her husband.  She thought there was love while courting but once she married the love disappeared.  It's like a female was worth less than a man's horse.  When their daughter was born he actually stormed out of the house angry that the child had not been a boy.  To him a daughter was worthless on the farm.  But her daughter, at age two, is unaware of her father's feelings and loves him anyway.  He has taken to drinking and gambling every penny  he had earned and every penny she had squirreled away hidden under the bed.  Now they would not be able to make the payment of the land loan.  Which means they would loose the land and their home.


But she never got the pleasure of confronting him about loosing the money because he had been murdered while working in the field and she knew who was responsible!

Annalisa's father owned a farm just across the road from her farm and he will be making all decisions for her now and he has decided she is to marry someone of her father's and  uncle's choosing.  A complete stranger to her from their homeland.  But what choice did she have, she had her daughter and an unborn child to provide for and she knew she could not do it alone.

Carl Richard's arrives with a letter from her uncle, but not as her groom but as a man seeking refuge from an injustice in the Old Country.  He has agreed to help her with the farm until her groom arrives.  But after working the farm and becoming acquainted and then friends with Annilisa how could he possibly stand by and see another man marry her.  Could she possibly have the same feelings towards him that he holds for her.

This story touched my heart.  I felt the pain she must have experienced, not being able to provide for her children and the emotional cruelty she had been subjected to by her husband.  The fact that she thought all men were like her father and husband was sad.

The author shows just how hard it was for the German immigrants to squeeze a life out of the land.  She writes of near starvation, arranged marriages and spousal abuse.  There is redemption, reconciliations and love to be found in the pages of this book.  You will feel like cheering Annalisa on throughout the book.

This is not an everything is coming up roses story.  But you will find love, hope and faith in God!  Sounds a little like reading from the book of Job in the bible.

Disclosure:  I received a free copy of this book from Litfuse Publicity Group/Bethany House for review.  I was in no way compensated for this review. This review is my honest opinion.