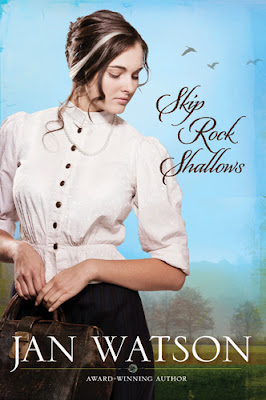 
Lilly Gray Corbett has just graduated from medical school and decided to accept an internship in the coal camp of Skip Rock, Kentucky. Her beau, Paul, is doing his residency in Boston and can’t understand why Lilly would choose to work in a backwater town. But having grown up in the mountains, Lilly is drawn to the stubborn, superstitious people she encounters in Skip Rock—a town where people live hard and die harder and where women know their place. Lilly soon learns she has a lot to overcome, but after saving the life of a young miner, she begins to earn the residents’ trust.

As Lilly becomes torn between joining Paul in Boston and her love for the people of Skip Rock, she crosses paths with a handsome miner—one who seems oddly familiar. Her attraction for him grows, even as she wrestles with her feelings and wonders what he’s hiding.

Where to buy:  Amazon, Barnes&Noble, CBD


Jan Watson won the 2004 Christian Writers Guild Operation First Novel contest for her first novel, Troublesome Creek. Her other awards include being named the best Kentucky author in 2012 by Kentucky Living magazine, a nomination for the Kentucky Literary Award in 2006 and second place in the 2006 Inspirational Readers Choice Contest sponsored by the Faith, Hope, and Love Chapter of the Romance Writers of America. Jan has published seven novels. As a registered nurse for 25 years at Central Baptist Hospital in Lexington, Kentucky, she incorporates her nursing experience in the hospital's mother/baby unit into her novels. Jan resides in Kentucky.

Watch for her next book TATTLER'S BRANCH, coming in September 2013.

Lilly Gray Corbett decided to take an internship in Skip Rock, Kentucky.  Her fiancee was not so sure she should accept the internship. His main concern was it was in a coal mine camp with harsh conditions very unlike Boston.  Lily was not taken as seriously in her profession as a man would have been.  She had been raised in the Kentucky mountains under similar conditions, so she was not sure how she felt about his reaction to her going to Skip Rock.  Although she knew she would miss him dearly and would write him often.

When she arrives in Skip Rock it is a shock to the residents because they were expecting a male physician.   She knew ahead of time this would be a problem just like it would have been anywhere she went to practice her profession.  She just hoped she could earn their trust.

Joe, one of the miners, tried to avoid the new doctor even though he was so drawn to her that he watch her every move.  She was the most beautiful woman he had ever seen.  Would he be able to hide his true identity from her?   How was it possible that she was really here?

I really enjoyed this book, it was like reading about a family friend.  I read several of the author's other books that have connection with this book.  There was plenty to keep my attention it has suspense, action packed, and a possible love connection.  The author writes of the conditions that existed in the camp which all came back to the importance for a doctor like Lily that actually cared about the miners and their families well being.

I am looking forward to reading the author's next book, TATTLER'S BRANCH to be released in September 2013.

Disclosure: I chose this book from Tyndale Rewards.  I was in no way compensated for this review.  This is my honest opinion.

If you found this review helpful vote yes or not here.