All In Good Time ~ The Gilded Legacy # 2, by Maureen Lang 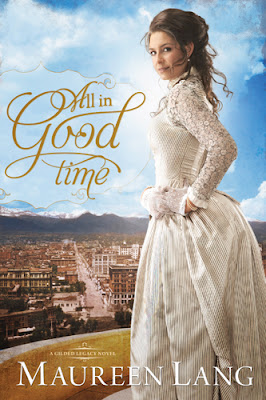 Dessa Caldwell has a dream: to open Pierson House, a refuge for former prostitutes in Denver’s roughest neighborhood. But after exhausting all charitable donations, Dessa still needs a loan, and nearly every bank in town has turned her down. Her last hope hinges on the owner of Hawkins National Bank.

Henry Hawkins has a secret: though he owns the most successful bank in town, his initial capital came from three successful raids on Wells Fargo coaches. Now he’s the most eligible bachelor in Denver, but to protect his criminal past, he’s built a fortress around his heart. Not even the boldest matchmaking mother can tempt him . . . until the day Dessa Caldwell ventures into his bank requesting a loan.

Though he’s certain her proposal is a bad investment, Henry is drawn to Dessa’s passion. But that same passion drives her to make rash decisions about Pierson House . . . and about whom she can trust. One man might hold the key to the future of her mission—but he also threatens to bring Henry’s darkest secrets to light. As the walls around their hearts begin to crumble, Henry and Dessa must choose between their plans and God’s, between safety and love.

Maureen Lang is the award-winning author of more than ten novels. She's always had a passion for writing, particularly stories that combine romance and history. After writing for the general market for several years, she wrote her debut inspirational novel, Pieces of Silver, which was a Christy Award finalist in the historical category. She has since written seven novels, including a recent trilogy of romances set against the dramatic backdrop of WWI—Look to the East, Whisper on the Wind, and Springtime of the Spirit. She turns to more peaceful (though no less dramatic) times in Bees in the Butterfly Garden, her upcoming release set among Fifth Avenue's finest during the Gilded Age of New York.

In addition to critical acclaim, Maureen's writing has garnered numerous industry honors. She has won the Romance Writers of America Golden Heart award, the Inspirational Reader's Choice Contest, and a Holt Medallion, and has been a finalist for Romance Writers of America's Rita, the American Christian Fiction Writers' Carol awards, and the Gayle Wilson Award of Excellence. Visit her online at www.maureenlang.com.

Dessa Caldwell grieves for her friend Sophia Pierson, they had planned on starting a home for women who are caught up in white slavery and prostitution.  Dessa is determined to carry out this dream.  She has found a house in a not so respectable area that would be perfect in every way especially the price.  But she needs a loan from the bank.

Henry Hawkins owns the local bank and his Uncle has just approved a large loan to Dessa Caldwell without his final approval.  When she insist on thanking him, he could not take his eyes off her.  He now had no intention of cancelling the loan.  He doubted she would have any success with her venture but he had to admire her determination.

A local businessman of questionable reputation becomes enamored with Dessa and her cause, or will she become a pawn in his own plans.  Although he is very attractive and acts the gentleman she has her doubts about his sincerity.  Henry tries to warn her to not associate herself or the Pierson House with this man.  She could loose everything she has worked so hard to build.

In this book the author brings to light white slavery and also of Chinese women sold into slavery.  Women had few rights in 1887.  Some married women were no better than slaves being forced to marry just for financial gain for their parents.  In arranged and loveless marriages husbands abused their wives.  In reading this story it is also very apparent employment opportunities were lacking for women, which caused some to starve or turn to prostitution.

The author did her research which made for an very interesting read. I am looking forward to her next book.

Disclosure:  I received a free copy of this book from Tyndale Blog Network/Tyndale House for review.  I was in no way compensated for this review.  This review is my honest opinion.