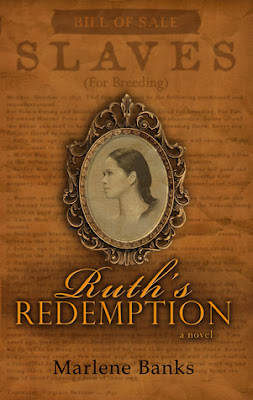 Set in the 1800s, Ruth's Redemption, is an unusual depiction of the lives of slaves and free blacks in pre-Civil War America.  Bo, was educated while a slave.  He was given his freedom and now owns a farm buying slaves for the sole purpose of giving them their freedom. Bo is also a man of God and widower whose life is destined to change when he meets the proud and hard-hearted slave girl, Ruth.
Ruth has known nothing but servitude and brutality since being separated from her mother at age thirteen. Purchased and sold primarily for breeding, her heart is filled with resentment and bitterness.  Ruth wants no part of Bo's Godly devotion.  Yet Bo is unlike any man she's known and her experiences with him will leave her forever changed.
A gripping slave era novel, Ruth's Redemption is a story of love, forgiveness, and redemption. Set against the backdrop of the Nat Turner Rebellion in Tidewater, Virginia, this novel shines the light of God's unconditional love in the darkness of a culture's cruel socially accepted inhumanity.


Where to purchase:  Amazon, Barnes&Noble, Kobo

MARLENE BANKS resides in Philadelphia, Pennsylvania. Along with being a prolific writer she has an associate degree in Theology from Rhema Bible Institute in Keysville, VA and is currently studying to initiate a Christian counseling ministry. Marlene is a member of Bethel Deliverance International Church in Wyncote, Pennsylvania. Her work resume includes thirty plus years in nursing and over eight years in business as a coordinator and administrative assistant. She considers her writing a means of evangelizing and relating Christian principles through fiction. It is also Marlene's goal to bridge the gap between faith-based and secular literature.

A ex-slave Bodine Peace was given his freedom by his owner along with a large parcel of land to farm.  He did not flaunt his freedom in fact after his farm became profitable he would go to the slave sales and purchase  slaves in order to turn around and give them their freedom.  Some moved on but some stayed to become share cropper on Bo's land.  They had become a respected community of freed slaves.

Ruth was being put on the slave auction block stripped down for all to see.  When a buyer decided to check out the merchandise Ruth was told to open her mouth so the buyer could examine her teeth.  She boldly refused to open her mouth and the more they tried to physically force open her mouth she fought that much harder then bit down on the auctioneer's hand. This gained her a hit up side her head and a promise to be hauled off to be punished with a whip. No one would even consider bidding on her after the way she just acted.   At this time Bodine Peace raised his voice and said he would buy her and he did buy for a very high price.  He could have bought several slaves there freedom for what he ended up paying for her.  But he could not bear to see this beautiful creature of God being abused anymore than she already had been.

When he gets back to his farm he has Naomi clean her up and care for her injuries.  He could not believe the feeling he was having for this woman.  His wife died several years ago during childbirth and Naomi was his wife's mother.  She was like his own mother.  He speaks with Naomi and tells her to find another woman Ruth can stay with because it would not be respectable for her to stay in his house.

As Ruth healed physically it was apparent she was not healing mentally or spiritually no matter how kind Naomi and Bo were to her and her needs.  As hard as they tried to convince her she would have a good home staying with a freed slave by the name of Mae, but Ruth would become fearful and beg to stay in Bo's house because it felt like it was her home.  Ruth thought that Bo was the most kind-hearted and generous man she had ever met.After many talks with Naomi, Ruth revealed bits and pieces about her life.   She was what they called a Breeder, a female slave which main purpose was to produce children and she had been abused beyond imagination since she was twelve years old.

Bo tried to keep the woman out of his head but the temptation of this beautiful woman living in the same house to him was unbearable for his soul.  Why had God brought this woman into his life?  Could she be the answer to his loneliness?  Is it God's will to take her as his wife?  She admits to not wanting to know his God because of the life she was forced to live without help from his God.  Can God break through her pride and hardened heart and reveal to her the love He has for her.  She can't see how God will ever free the slaves from their bondage, but Bo has great faith in the Lord our God that He will one day free His children from slavery because he had sent His Son to free mankind from sin.

The story is told from the view of freed slave and many that were not free.  It shows how strong their faith and belief was in God and His will.  They faith that He would give them freedom as He did for the Hebrews who were finally freed.

The author included the historical figure and event of Nat Turner and the Rebellion in Tidewater, Virginia.  An uprising of slaves against the white plantation owners which killed many on both sides.  The story gave me another look and lesson into history that I will gladly pass on to my children and grandchildren.

Disclosure:  I received a free copy of this book from MPNewsroom/ Moody Publisher for review.  I was in no way compensated for this review.  This review is my honest opinion.


If you found this review helpful vote yes or no here.