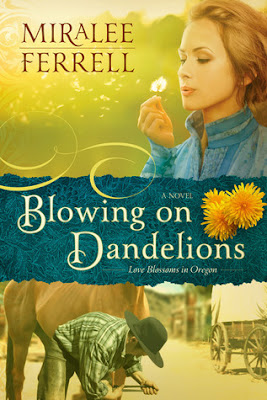 Katherine Galloway knew this moment of calm wouldn’t last, blown away like the dandelion seeds she scattered as a girl. In 1880, three years after her husband’s death, she struggles to run an Oregon boardinghouse and raise two girls alone. Things don't get easier when her critical, domineering mother moves in. Katherine must make the situation work, but standing up for herself and her family while honoring her mother isn't easy. And with a daughter entering the teenage years, the pressure on Katherine becomes close to overwhelming. Then she crosses paths with Micah Jacobs, a widower who could reignite her heart, but she fears a relationship with him might send things over the edge. She must find the strength, wisdom, hope, and faith to remake her life, for everything is about to change.

Where to buy: CBD, Amazon, Barnes&Noble

Miralee and her husband Allen have been married almost 40 yrs. They live on 11 acres in the beautiful Columbia River Gorge in southern Washington State, where they love to garden, play with their dogs, take walks, and go sailing. Miralee also rides her horse on the wooded trails near their home with her grown daughter who lives nearby. She’s an avid reader and has a large collection of first edition Zane Grey books, which inspired her desire to write fiction set in the Old West. When she started writing fiction Miralee believed that she’d always stay with women’s contemporary, but has since branched out to historical romance. Her first two books were women’s contemporary with Kregel Publications, The Other Daughter, and Finding Jeena.

Miralee serves as president of the Portland, Oregon, chapter of American Christian Fiction Writers (ACFW) and belongs to a number of writer’s groups. She speaks at women’s groups, libraries, and churches about her writing journey, and has taught a both writers and library conferences.

Her fourth historical romance with Summerside Press in their Love Finds You series, set in Sundance, Wyoming released summer of 2011. Miralee is currently under contract with David C. Cook for a three-book series of historical romance novels, set in Oregon. Some of her books have a suspense thread as well as romance, and three have a higher degree of action with a decided Old West slant. Her upcoming series will be somewhat of a women’s fiction/historical romance combination, with the emphasis on well-developed characters and plot.

Katherine Galloway wishes she could be excited that her mother is coming for a visit.  But instead she is anticipating a very stressful situation.  Her mother is outspoken and overbearing not having anything nice to say to or about Katherine.  Katherine is treated like an imbecile by her mother.  When in fact she done very well for herself and her two daughters.  She owns a boarding house in Oregon which she has been in full charge of since she became a widow.

Since Micah Jacobs recently moved to Oregon he keeps running into Katherine Galloway.  He has to admit she is an attractive woman but he is not shopping for a new wife.  He still grieves his deceased wife. Anyway Katherine seems to have more on her plate than she can handle.  His teenage son has made fast friends with Mrs. Jacobs daughter at which Mrs. Jacobs seems to object.

Between Katherine dealing with running the boarding house, the arrival of her mother, her daughter's new friendship and then her youngest daughter to keep up with she is just about on her last nerve.

Wouldn't it be nice to have someone to lean on in times of trials and tribulations?  A spouse is would be a marvelous option.  God tends to give to us abundantly when we are not even looking.  For He already has a plan for our lives.

This was a most interesting read.  I have heard of mother-in-laws on the war path but in this story the author has created a character you will not likely forget, a mother from Hades.  I loved the support system the author created for Katherine which was her church quilting group.  We depend on our Lord to comfort us yet He also gives us the church community as a support system.  The author and the Lord had to be very creative in the unlikely romance between Katherine and Micah since there are  so many obstacles in their way.

Disclosure:  I received a free copy of this book from the author for review.  I was in no way compensated for this review.  This review is my honest opinion.