Love Finds You in Tombstone Arizona by Miralee Ferrell 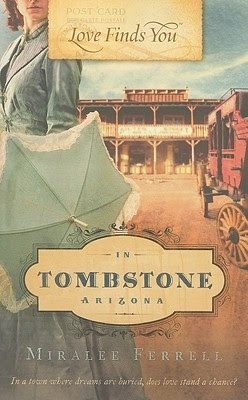 Love Finds You in Tombstone, Arizona

In a town where dreams are buried, does love stand a chance?

Love and second chances aren’t easy to come by in a town named Tombstone. When Christy Grey receives an urgent summons to Tombstone, Arizona, she reluctantly leaves her new life in California. The trip goes from bad to worse when four masked men hold up Christy’s stage. She finally arrives in Tombstone to find her mother ill and her brother trapped in a life of gambling. Desperate for money to support her family, will Christy bow to pressure from the local saloon owners and return to the life she thought she’d given up for good?

Nevada King has problems of his own. He’s been dodging bullets for years and wants nothing more than to settle down and get married. But he’s on the run from outlaws bent on revenge, and the one woman who captures his interest recognizes him from the stagecoach holdup. Will Christy turn Nevada in to the authorities, or will the outlaws on his trail catch him first?


Where to purchase:  Amazon, Barnes&Noble, CBD

Miralee and her husband Allen have been married almost 40 yrs. They live on 11 acres in the beautiful Columbia River Gorge in southern Washington State, where they love to garden, play with their dogs, take walks, and go sailing. Miralee also rides her horse on the wooded trails near their home with her grown daughter who lives nearby. She’s an avid reader and has a large collection of first edition Zane Grey books, which inspired her desire to write fiction set in the Old West. When she started writing fiction Miralee believed that she’d always stay with women’s contemporary, but has since branched out to historical romance. Her first two books were women’s contemporary with Kregel Publications, The Other Daughter, and Finding Jeena.

Miralee serves as president of the Portland, Oregon, chapter of American Christian Fiction Writers (ACFW) and belongs to a number of writer’s groups. She speaks at women’s groups, libraries, and churches about her writing journey, and has taught a both writers and library conferences.

Her fourth historical romance with Summerside Press in their Love Finds You series, set in Sundance, Wyoming released summer of 2011. Miralee is currently under contract with David C. Cook for a three-book series of historical romance novels, set in Oregon. Some of her books have a suspense thread as well as romance, and three have a higher degree of action with a decided Old West slant. Her upcoming series will be somewhat of a women’s fiction/historical romance combination, with the emphasis on well-developed characters and plot.

Christy Grey receives a telegram from her brother urging her to come and care for her ailing mother.  Christy had just gotten settled into her new life with new friends and employment in California but she figured this would be a perfect oppurtunity to reconcile with her mother.  On her long trip to Tombstone, as if the journey wasn't difficult to begin with, the stage coach gets robbed.  Then she no sooner arrives in Tombstone and her brother takes off for his wayward life of gambling leaving her to deal with her ailing mother.  There was little money and even worse there was an almost bare cupboard.  She would have to find some kind of employee right away, just to provide for their necessary needs.

Nevada King is headed for Tombstone to begin a new life and hopefully acquire a wife and his own ranch.  He must stop for one more night before reaching his destination.  With luck, he thought, he rides up on a group of men that have camp set up for the night and hopes they would allow him a bite to eat and a place camp for the night.   But come morning it become apparent these men were not what he had assumed. He meets a lovely women during a stage holdup and then recognizes her latter on after he arrives in Tombstone.  Will Christy turn him into the law assuming he was part of the stage holdup or will outlaws catch up with him first to seek revenge?

It was nice to see the author borrowed the character Christy Grey from her book Love Finds You in Last Chance, California.  She continues with Christy's life in a reconciliation attempt to build a new relationship with her mother and brother.  The author creates many situations which lead the young woman into a new relationship not only with her family but with a handsome cowboy and most importantly God.  This book has trust issues, revival of ones soul, and a mission to save a young women from a world of white slavery.
Showing us how God provides for his children.

Disclosure:  This book was a gift and I was not required to write a review. I was in no way compensated for this review.  This review is my honest opinion.

If you found this review helpful write yes or no here.