Interview with DIANNE K. SALERNI Author of THE CAGED GRAVES 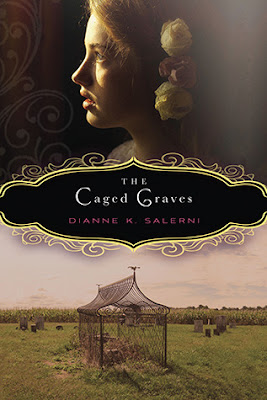 In Catawissa, the dead don't always stay where you put them...


17-year-old Verity Boone expects a warm homecoming when she returns to Catawissa, Pennsylvania in 1867, pledged to marry a young man she's never met. Instead, she finds a father she barely knows and a future husband with whom she apparently has nothing in common. And a truly horrifying surprise awaits her: the graves of her mother and aunt are enclosed in iron cages outside the local cemetery. Nobody in town will explain why, but Verity hears rumors of buried treasure and witchcraft. Perhaps the cages were built to keep grave robbers out . . . or to keep the women in. Determined to understand, Verity finds  herself in a life-and-death struggle with people she thought she could trust.

Inspired by a pair of real caged graves in present-day Catawissa, this historical YA novel weaves mystery, romance, and action into a suspenseful drama with human greed and passion at its core.


Where to buy:  Amazon, Barnes&Noble

Caged Graves and the Origin of a Story

I first saw the photograph in a random article on the internet: a lonely cemetery with worn and tilted tombstones – and one grave with an iron cage around it.

I couldn’t get the photo out of my mind, so my husband used the clues in the article and Google Earth to identify the graveyard as the Old Mt. Zion Cemetery outside Catawissa, Pennsylvania. It wasn’t that far from home, so we decided to take a drive to see it in person. I wasn’t even sure the grave would really be there, but we received a shock when we pulled the car up beside the abandoned graveyard and saw two caged graves! Two?! 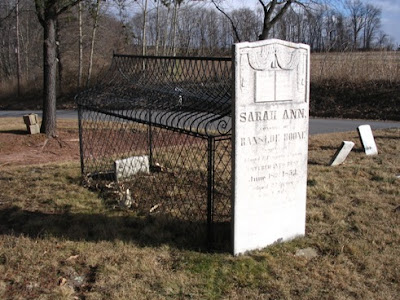 The graves belonged to Asenath Thomas and Sarah Ann Boone. They were clearly related in some way, since Sarah was a Thomas by birth and Asenath was a Thomas by marriage. Both women died in 1852, within a few days of one another. 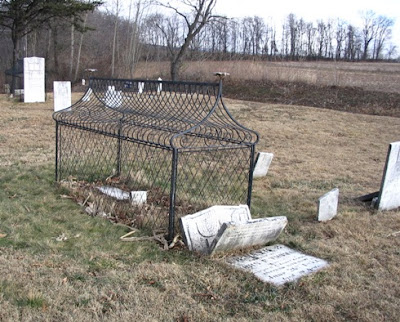 Why would anyone erect iron cages around their graves? The original article I read claimed Sarah Ann’s family believed she’d been bitten by a vampire – or maybe a werewolf. But legends of vampires and werewolves weren’t popular in the U.S. in the 1850’s, and besides, the writer of the article hadn’t even been to the cemetery or he would’ve mentioned the other grave.


I found a more respectable article written by the local historian who suggested the cages were erected to keep out grave robbers. In the mid-19th century, fresh corpses were in demand by medical schools. This was a logical (although still creepy) explanation for the cages -- but why build something permanent when the danger of grave robbing would pass within a few weeks? And why were only these two graves protected? What made these women potential targets – who they were, or what they died from?

By now, I knew I had a novel-worthy premise. I started digging around in the history of that region and discovered a little known battle of the Revolutionary War had taken place nearby – about 75 years prior. When the Americans lost, captured Continental soldiers were brutally massacred by British and Indian forces. Then the countryside was razed by the victors, driving settlers to flee into a vast marsh. Most of them died of exposure in what would eventually become known as the Shades of Death swamp, but a few stragglers made it out and took refuge in Catawissa -- the town with the mysterious cemetery.

Tying these elements together became the heart of my story and a three-pronged mystery. How did Sarah Ann and Asenath die? Why were their graves caged? And how are they connected to events in the Shades of Death 75 years earlier?

My novel The Caged Graves is fictional, of course. The real story behind these graves remains a mystery.

Author Dianne K. Salerni of WE HEAR THE DEAD (Sourcebooks 2010), THE CAGED GRAVES (Clarion 2013), and THE EIGHTH DAY (a forthcoming series from HarperCollins). She is represented by Sara Crowe of Harvey Klinger, Inc.

Verity Boone at age two years, was taken from her father, shortly after her mothers  unforeseen death, in order to have the chance to have a normal life while being raised with her cousins in her Aunt's home.  Now Verity is 17 years old and has promised to marry a respectable young man from her home town of Catawissa, Pennsylvania.  When she arrives at her father's home nothing is familiar to her. She did not receive a very warm welcome from anyone including her father. Something was not right, maybe she was being ill treated because people were jealous that she was to marry the most sought after bachelor in Catawissa.  But then as time goes by it is apparent it was more of the fact she was her mother's daughter. Stories of witchcraft was whisper behind her back.  There are many secrets leading up to her mother's death and even at this time in her life when she should be enjoying the preparations for her wedding she is forced to face a life and death situation with no one to turn to for help.

If this had been a movie, which I think it should be, you would be sitting on the edge of your seat and would not dare to go to the restroom or to get popcorn. Yep, it is that good.  I did not want to put the book down I took it everywhere with me. Yes even to the restroom.

The author has done a bang up job on this book. You will find high anxiety, greed, action, mystery, romance and redemption all through this book. What a creative imagination this author has put to work in her writing.  I hope to be reading more of her books soon.

Disclosure:  I received a copy of this book from Houghton Mifflin Harcourt/Netgalley for review. I was in no way compensated for this review.  This review is my honest opinion.