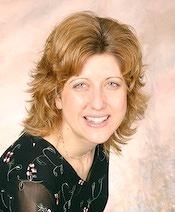 Melanie Dobson has written ten contemporary and historical novels including five releases in Summerside's Love Finds You series. In 2011, two of her releases won Carol Awards: Love Finds You in Homestead, Iowa (for historical romance) and The Silent Order (for romantic suspense).

Melanie received her undergraduate degree in journalism from Liberty University and her master's degree in communication from Regent University. Prior to her writing career, Melanie was the corporate publicity manager at Focus on the Family and a publicist for The Family Channel. She later launched her own public relations company and worked in the fields of publicity and journalism for more than fifteen years.

Melanie and her family enjoy their home in the Pacific Northwest. The entire Dobson family loves to travel and hike in both the mountains and along the cliffs above the Pacific.

When Melanie isn't writing or playing with her family, she enjoys exploring ghost towns and dusty back roads, line dancing, and reading inspirational fiction.

For more about Melanie Dobson and her books, visit www.melaniedobson.com. 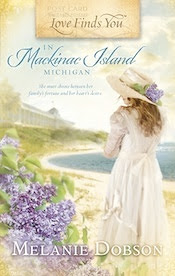 As the Gilded Age comes to a close, Elena Bissette's once-wealthy family has nearly lost its fortune. The Bissettes still own a home on fashionable Mackinac Island, where they will spend one last summer in the hope of introducing Elena to a wealthy suitor. But Elena is repulsed by the idea of marrying for money.

Quickly tiring of the extravagant balls, Elena spends most evenings escaping back into Mackinac's rugged forest. There she meets Chase, a handsome laborer who shares her love for the night sky. The two begin to meet in secret at an abandoned lighthouse, where they work together to solve a mystery buried in the pages of a tattered diary.

As Elena falls in love with Chase, her mother relentlessly contrives to introduce her to Chester Darrington, the island's most eligible bachelor. Marriage to the elusive millionaire would solve the Bissettes' financial woes, and Elena is torn between duty and love.

Where to Buy: Amazon
Check out the other Reviews from this Tour


Celebrate with Melanie by entering her Kindle Giveaway!

One grand prize winner will receive:

1894, Elena Bissette feels obligated to marry into wealth because she knows this is what her parents expect. Well, that is what her mother expects. Her father seems to only wish his little girl be happy with the man she chooses to be her husband.

Every summer Elena and her parents go to Mackinac Island, Michigan to stay in their vacation cottage, which is really more like a mansion. Her mother is so excited for Elena to meet Chester Darrington. He is a very sought after unattached, handsome and extremely wealthy. Quite the catch. But rumors are spreading that Elena's mother is out to snag him to marry her daughter just for his wealth. Which is true. But Elena only attends all the tea parties and social gatherings to appease her mother. Elena should have been an actress because she can put on a good show of a proper lady.


Now Elena would much rather wander through the woods after dark and visit the islands old lighthouse. The lighthouse gives her more of a view of the island but most of all to the stars. One day she finds a very handsome gentleman in her lighthouse and he has found her drawings. When he sets his eyes on Elena he is mesmerized by her beauty. As they spend more time together at the lighthouse their hearts recognize feelings are strong for each other. But they did not share the truth about their identities. She had no idea he was the wealthy catch her mother was after and he had no idea she was the daughter of the woman that was out to trap him into marriage that was of no interest to him. What a mess!

There has been said that there is a ghost in the lighthouse. So much sorrow and tragedy is the tale about a woman and her two small children in the early 1800's during the British invasion. The woman's husband is missing and her cries for him can be felt by Elena each time she enters the lighthouse.

Another interesting fact that the author provided about the island was that even to this day no automobiles are allowed on the island.

Love Finds You in Mackinac Island, Michigan will be another of my favorites. The author put her talent of writing together with historical facts and wrote a wonderful novel. I must say I have never heard of Mackinac Island but after reading this book I will remember it fondly along with the characters in this book.

Disclosure
I received a free copy of this book for review by Litfuse/Summerside. I was in no way compensated for this review. It is my own opinion.