THROUGH RUSHING WATER by Catherine Richmond 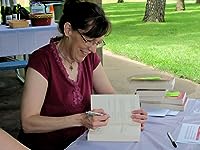 I was busy raising a family, working as an occupational therapist, and trying to remember where I hid the chocolate, when a song sparked a story within me. The journey to publication has been long, but full of blessings. I couldn’t have done it without ACFW, RWA, and FHL, the inspirational chapter of RWA, and Nebraska Novelists critique group.

I was born in Washington, DC, grew up in northern Virginia, attended Western Michigan University, and moved around a lot for my husband’s aviation career. Maybe our paths have crossed; shoot me an email and we’ll figure it out!

My favorite place to write is the porch. Then I reward myself with reading time in my air chair – and chocolate, of course!

Through Rushing Water
by Catherine Richmond

Sophia has her life all planned out—but her plan didn’t include being jilted or ending up in Dakota Territory.

Sophia Makinoff is certain that 1876 is the year that she’ll become the wife of a certain US Congressman, and happily plans her debut into the Capitol city. But when he proposes to her roommate instead, Sophia is stunned. Hoping to flee her heartache and humiliation, she signs up with the Board of Foreign Missions on a whim.

With dreams of a romantic posting to the Far East, Sophia is dismayed to find she’s being sent to the Ponca Indian Agency in the bleak Dakota Territory. She can’t even run away effectively and begins to wonder how on earth she’ll be able to guide others as a missionary. But teaching the Ponca children provides her with a joy she has never known—and never expected—and ignites in her a passion for the people she’s sent to serve.

It’s a passion shared by the Agency carpenter, Willoughby Dunn, a man whose integrity and selflessness are unmatched. The Poncas are barely surviving. When U.S. policy decrees that they be uprooted from their land and marched hundreds of miles away in the middle of winter, Sophia and Will wade into rushing waters to fight for their friends, their love, and their destiny.

In 1876 Sophia Makinoff is teaching at a college and is soon to be engaged to a U.S.Congressman. To be the wife or even fiancee was just a fabrication of her own making. Congressman Montgomery chose her roommate and friend instead of her. Annabelle a complete and utter mistake for the wife to a U.S.Congressman when everyone knew Sophia would have been the best choice. How would she face her students and faculty?  She was utterly humiliated.

She decides to volunteer to be a missionary in the far east. But instead she is assigned as teacher to the children of Ponca Indian Agency in the Dakota Territory. She had every intention in requesting to be re-assigned to the far east rather than stay in Dakota Territory. It does not take long for her to fall in love with the Ponca Indians especially the children she is teaching. She knew this was the mission God had meant for her to serve.

Willoughby Dunn was the agency carpenter and also loved the Poncas. He had appointed himself as  protector to the new school teacher and was at her beck and call. She tried to ignore his her new shadow but soon she felt her heart warming to this special man. It was Sophia's job to teach the children about the white man's world and ways. And it was Will's job to teach the men to build houses, barns and many other things that were needed to live in a white man's world. But all of this was almost impossible to do without the clothing, blankets, supplies, tools, rations and money.  These were things the government had promised the Poncas. On top of that they had no way to defend  themselves from other tribes attacking them.

Sophia and Will worked hard to get what was absolutely necessary for survival for the Poncas to get through the bitter cold winter, sickness and near starvation. They refused to give up on their mission.

This is a heart wrenching story of neglect and abuse against the Ponca Agency. The author was very thorough in her description of the conditions and neglect the Poncas were forced to endure. The author provides many facts of this historical event.

If you are more interested do a search of The Ponca Agency in the Dakota Territory. Here is a link if you want to learn more. White Eagle was the hereditary chief of the Poncas when they came to Indian Territory in 1877. As chief, he led the Poncas in their last war against the Sioux before they left Dakota Territory and Nebraska. He was also the medicine man and religious advisor. White eagle led the "hot country" Poncas, those who chose to remain in Indian Territory, for 50 years.

Disclosure
I received a free copy of this book from Thomas Nelson/Booksneeze for review. I was in no way compensated for this review. It is my own opinion.