ROAD TO the Christys - Visionary - THE CHAIR by James L. Rubart 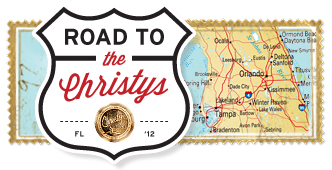 I'm a husband, dad, author, marketing guy--in that order, and live in the Pacific Northwest.

If someone gave you a chair and said it was made by Jesus Christ, would you believe them?

When an elderly lady shows up in Corin Roscoe's antiques store and gives him a chair she claims was crafted by Jesus, he scoffs. But when a young boy is miraculously healed two days after sitting in the chair, he stops laughing and starts wondering . . . could this chair heal the person whose life Corin destroyed twelve years ago?

As word spreads of the boy's healing, a mega-church pastor is determined to manipulate Corin into turning over the chair. And that mysterious woman who gave him the piece flits in and out of his life like a shadow, insinuating it's Corin’s destiny to guard the chair above everything else. But why?

Desperate, he turns to the one person he can trust, a college history professor who knows more about the legend of the chair than he'll reveal. Corin's life shatters as he searches for the truth about the artifact and the unexplained phenomena surrounding it. What’s more, he's not the only one willing do almost anything to possess the power seemingly connected to the chair.

I wasn't sure what to expect when I started 'The Chair' - because this is the first book that I've read by James L. Rubart - but I'm pleased to say that I really enjoyed it! It had suspense, drama, and a good story.

If you were given an ancient-looking chair and told Jesus Christ made it, would you believe it?

Corin Roscoe, the owner of an antiques store, is given a chair and told it was made by the most talented craftsman the world has ever known. He is then taken on an intense journey of grief, joy, sorrow, and restoration.

He lives with guilt over pain from the past, deals with claustrophobia, and is afraid of going in water because of something that happened when he was young.

I found many parts of 'The Chair' weird (which I think was the intent) and I felt as though I was reading a mystery. There was so much going on, but until the end you didn't know the full intent (and even now I'm still slightly confused). I feel there should have been at least one more chapter (or at least an epilogue) - the ending didn't feel like the end (if that makes sense).

'The Chair' puts a whole new light on James L. Rubart's books. I now plan to read other books by him in the future. I recommend this if you enjoy reading books that have a slightly weird plot, but are really interesting (kind of like Ted Dekker's books).

*Many thanks to B&H publishing and JKSCommunications for my review copy.*